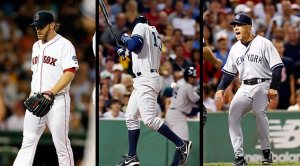 Hello everyone and welcome to another edition of One Liner Friday’s. Here you can find the past week in sports wrapped up in one line and one line only. Enjoy!!

Ah yes, I must start with Ryan “Put Him In The Dumpster” Dempster.

I figured it out, The Dumpster thinks he is Batman, and felt taking the law into his own hands was perfectly acceptable (“They’ll have to understand, I’m Batman!”).

You know, it’s a shame Dempster had do this, I actually used to like him thanks to his hysterical Harry Caray impression.

Think about it, if you obviously committed a crime and got away with it, wouldn’t you go hide in a cave somewhere and make sure you never repeated such an egregious error again?

Enough of this Preseason nonsense, let’s bring on the real football already!

Are you ready for some fantasy football??

They have now won 5 games in a row, and they’re coming for a playoff spot; watch out everybody.

I know A-Rod has helped the team in their latest surge, but for people not to thank Alfonso Soriano for the teams offensive resurgence is ridiculous.

Tiger keeps playing well before and after Majors, hmmmmmm.

Anybody else tired of hearing about Jhonny Manziel?

Oh okay good, it’s not just me, for a second there I thought everyone was enjoying that drivel.

It’ll be sad to watch him go, but this is the beginning of the end for the best tennis player in the history of the world.

I bet you didn’t know this, or even know who they are, but the Bryan brothers are the Tiger Woods (if you could clone him) of Men’s Doubles in Tennis.

They are twin brothers, and they currently hold the ‘Tiger Slam’ in tennis and will make it the traditional Grand Slam when they win The U.S. Open and hold all 4 Slam titles in the same calendar year.

By the way Ryan Braun, no one wants your stupid fake apology so just shove it somewhere painful.

Clayton Kershaw is one of the best pitchers baseball has ever seen, his e.r.a. this season is 1.72!

I think it’s a solid move (I mean who wouldn’t want a car insurance agent working for them?).

I know I’m repeating myself with this one, but I want everyone to know who predicted Mayweather’s first loss first.

Major League Baseball is getting to the exciting part of the year when the rest of you start watching and football is right around the corner, man this time of the year is great.

Enjoy the rest of your summer everyone!!