Watching professional golf is interesting — to some. Some find it boring. Some think, “ehh, that’s no big deal, I could do that!” And some, or most, avoid it all together.

Whether you like, love, or hate golf, you should appreciate how talented professional golfers are. For anyone who’s played golf, understanding and amazement is in order. And that’s what made Thursday’s opening round at the U.S. Open so much fun to watch.

While I don’t actively root for golfers to play poorly, I enjoy watching them look human, mortal. When a professional golfer, who qualified for the U.S. Open, shoots a 92, I feel better about my golf game. It’s true!! 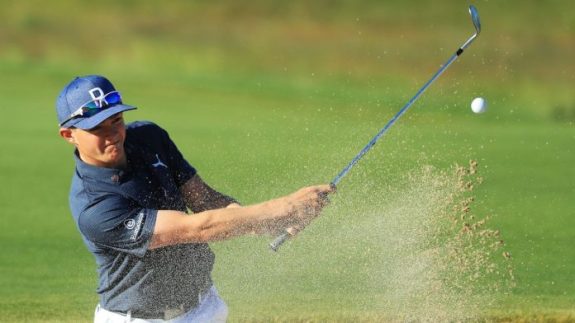 And yes, that part’s real. Someone shot a 92 Thursday at Shinnecock Hills. That someone would be Scott Gregory (as pictured above). Gregory (23), from England, became the 1st golfer since 2002 to shoot a round in the 90s at the U.S. Open. In Gregory’s defense, Shinnecock was playing REALLY tough Thursday. The four co-leaders, including Dustin Johnson, stand at just -1. Notables like defending champion Brooks Koepka (+5), Bubba Watson (+7), Phil Mickelson (+7), Jordan Spieth (+8), Tiger Woods (+8), Jason Day (+9), and Rory McIlroy (+10) all struggled tremendously.

The top-10 golfers in the world combined to shoot 52-over par Thursday.

Struggled is the understatement of the century. Those scores are putrid. With the field struggling mightily, it’ll be interesting to see where the cut lands, and who will be on the wrong side of it.

I know, I know, it’s just the Tampa Bay Rays, but a win, is a win. The Yankees continued their strong play Thursday with a 4-3 victory, and have now won 11-of-their-last-14 games. And while many expected the big bats of Sanchez and Stanton to carry this Yankee lineup, it’s the youth movement of Gleyber Torres, Miguel Andujar, and Aaron Judge doing the heavy lifting.

Yes, the Yankees need a (good) starting pitcher. But for “experts” to suggest they should include Gleyber Torres in a trade, is not only preposterous, it’s a fireable offense. Imagine if the Yankees traded Derek Jeter in 1996. The entire landscape of my childhood would be different. But more importantly, the five World Series victories from ’96 to ’09 may have never happened. Don’t look at me like I’m crazy! That’s the kind of talent we’re talking about here.

Since Torres’ call-up (April 22nd), he’s been the Yankees’ best hitter. He’s hit 13 home runs with 33 r.b.i, while hitting .295. He has two walk-off hits, and is the sole reason they pulled off another victory Thursday.

(the magic happens at 50 seconds)

Would you trade Gleyber Torres?? If you are insane enough to say yes, please stay away from my comment section. Thanks!