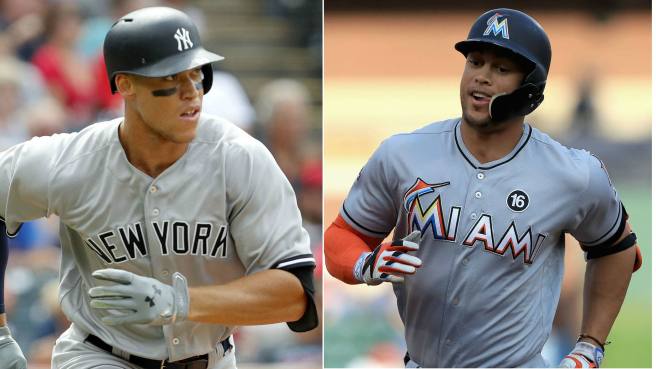 It’s a great day to be alive!!

But, more importantly, it’s a great day to be a Yankees’ fan!!

On Saturday, the New York Yankees and Miami Marlins agreed on a trade that would send Giancarlo Stanton to the Bronx. The Marlins received Starlin Castro and 2 prospects, Jorge Guzman and Jose Devers. The deal is pending a Stanton physical and signature. The Yankees will assume $265 million of the remaining $295 million left on his contract. This is significant, only for the Yankees’ wallet, as they’ll remain under the luxury tax threshold of $197 million next year (cutting their tax figure from 50% to 20%).

This deal comes on the heels of the Marlins shipping Dee Gordon to the Seattle Mariners. The Marlins’ new owner, Derek Jeter, is cutting costs in an effort to get payroll under $90 million. I wouldn’t get too comfy if I was Starlin Castro. Expect the Marlins to also get out from under the contracts of Marcell Ozuna and Christian Yelich in the near future. Keep your heads up Miami. While rebuilds aren’t fun to watch, I’d trust Derek Jeter with my baseball team.

This is a TREMENDOUS move by the Yankees. Fresh off the 2017 Executive of the Year Award, Brian Cashman is looking to add to his and the Yankees’ trophy case for years to come. There’s literally only 1 negative to this deal for the Yankees; Stanton is under contract for 10 more years. That’s enough negativity for 1 day.

9.) Ronald Torreyes (or me — it doesn’t matter who you put here)

Don’t feel like pitching to Judge because he’s hit 4 home runs in as many days?? No problem. Pitch around him to get to Stanton. Wait that’s a bad idea. Put 2 men on with nobody out to face Gary Sanchez?? Also, not the best of ideas.

It’s not even fair.

By no means am I saying this makes the Yankees World Series favorites. But, they’re closer than they were yesterday. If they acquire a decent starting pitcher, I’d imagine Vegas will reconsider.

This is the part when Yankees’ haters and bitter Mets’ fans make a lot of noise….

Scores of boos coupled with echoes of “Evil Empire” seem loud today, but will turn to white noise after the crack of Giancarlo Stanton’s bat in Yankee Stadium. All I have to say to the “haters” is: THIS WAS A TRADE!! It’s not the Yankees’ fault Stanton had a no-trade clause. It’s not the Yankees’ fault he said no to the San Francisco Giants and St. Louis Cardinals. Stanton wanted to be a Yankee, so Stanton is a Yankee. Period. End of story.

Who are the 2 happiest guys in New York right now?? Aaron Boone and Gary Sanchez. Boone, stepping into the most coveted position in all of sports, sans experience, is getting the best Christmas present anyone could ever hope for. And Gary Sanchez, already overshadowed by Aaron Judge, will slide even deeper into the shadows, and continue to hit home runs at a record setting pace.

What do you think of the Giancarlo Stanton trade?? Does this make the Yankees World Series favorites?? Tell me in the comment section below.