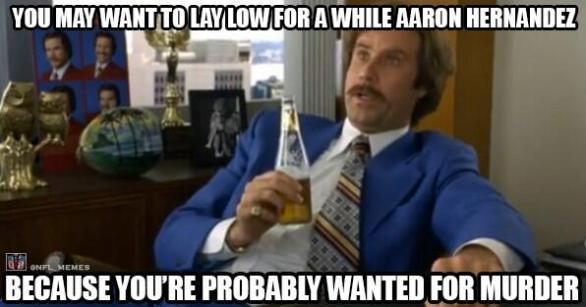 Every Friday I like to infuse a little humor into everyone’s day.  Here you will find a one-liner on a topic from this past week.  These gems will be one line and one line only (we’re gonna dance to one song and one song only).  Enjoy.

Aaron Hernandez is the 2014 version of OJ Simpson….only dumber.

If I had essentially gotten away with double murder, I wouldn’t commit another murder to cover-up the first 2 murders that I already got away with; I would lay low for the REST OF MY LIFE.

Anyone else want Donald Sterling to go away?

Yea, me too, so here’s what we’re going to do: stop talking about him.

Michael Sam is living proof of something I say every day; everything is about money.

Unbelievably hypocritically, Michael Sam has decided to do a reality tv show about his path to the NFL as a gay player because, HE JUST WANTS TO BE SEEN AS A FOOTBALL PLAYER AND NOTHING ELSE.

With Marlin’s pitcher, Jose Fernandez, adding to the long list of pitchers needing tommy john surgery, MLB teams should just offer the surgery as an option on draft day.

Phil Jackson at the plate, and the pitch, he swings, and misses.

You know it’s bad when Phil Jackson can’t even convince his protégé to come work for him.

Now, Phil Jackson will be scouring middle schools across the country for his next coach.

I happen to like Stan Van Gundy as a coach, but you picked Detroit over Golden State?

Must be the weather in Detroit that lured him in.

So let me get this straight, Johnny Manziel has the most jersey sales in the NFL since April 1st, people are actually excited and talking about the Cleveland Browns (for the 1st time in eternity), and in turn the organization will make more money, and you Jimmy Haslam, the owner of The Cleveland Browns, decide to tell Manziel to ‘act like a backup?!?!’

That makes about as much sense as the NCAA bylaws.

Oh yeah, there are hockey playoffs going on, I almost forgot.

In all seriousness, although I am not a New York Rangers fan, I fully appreciated the comeback that they pulled off to come back from being down 3 games to 1 to the Pittsburgh Penguins.

I’m sure that Martin St. Louis will give it his all throughout the rest of these playoffs for himself, his teammates, and most importantly his mother.

This has been another edition of One-Liner Fridays.  If you have a One-Liner of your own, please feel free to leave them in the comment section below.  Thanks.