Step down from the ledge and slowly..walk..away.

While New York’s MLB teams are having polar opposite seasons, both seem ready to hit the panic button….

The Yankees have the 3rd best record in MLB (63-35). They’re in the midst of a spectacular season, on pace to win 104 games, and head to the postseason for the one billionth time. However, Yankee fans, alongside local writers and talk show hosts, are leaning toward the panic button — again. That’s my cue….

Allow me to say the same thing I said when the Yankees were 9-9 (on April 20th):

Yes, I’m aware they’re 13-13 since June 22nd. Yes, I’m also aware they’re 6 games back of the Red Sox in the AL East. And YES, I’m aware if they don’t win the division they’ll have to settle for a (ridiculous) one-game playoff. But let’s stop pretending the Yankees are falling off a cliff. Offensively speaking, they either lead, or are in the top-five, of the following statistical categories:

And while everyone is freaking out, clamoring for a new starting pitcher, their pitching staff ranks in the top-five of the following categories: 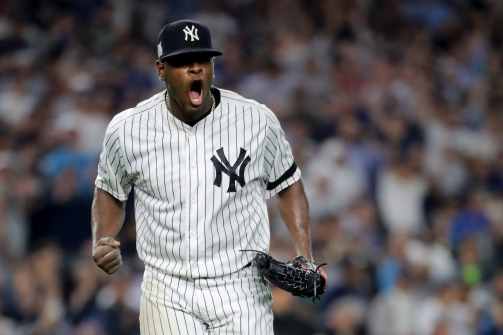 Now, I’m not saying everything is perfect. The Red Sox ARE 40 GAMES OVER .500 (71-31)!!!! And while I trust Luis Severino, and the Yankees, in a home, one-game playoff against the Seattle Mariners, ANYTHING can happen.

Have I mentioned how much I despise this wild card, playoff format?!

Hell, if Severino pitches like he did Monday night, the Yankees’ postseason will be over before it starts. Which brings me to Mr. Gary Sanchez, the laziest man in show business. The Yankees lost 7-6 to the Tampa Bay Rays Monday night. While Sanchez wasn’t the sole reason the Yankees lost, he certainly DID NOT help their cause:

Gary Sanchez is the most talented, offensive catcher in baseball. Despite his despicable .188 batting average this season, he’s in scoring position every time he steps in the batter’s box. However, effort, energy, and hustle are not things you’re born with. They are not predetermined. ANYONE can hustle!! So, for Gary Sanchez to lollygag after a baseball, that bounced off his own foot, down the 3rd baseline, and allow a runner to score from 2nd base, is inexcusable. For Gary Sanchez to not run out a ground out, because he THOUGHT the play was going to 2nd base, is reprehensible. Side Note: It did go to 2nd base. And he was still thrown out at 1st.

While the Yankees need Sanchez’s bat in the lineup, he MUST be benched for at least one game.

The moral of the story is the Yankees will be fine. It couldn’t hurt to add a starting pitcher along the lines of Chris Archer or J.A. Happ, but I won’t freak out if they stand pat.

**For those who read this far….THANK YOU!! This is also a friendly reminder that I am a rare breed of human. They call me an ‘Objective Yankee Fan’.**

Check back with DaveTalksSports.com tomorrow to catch me tie a pretty little bow around the ineptitude we call the New York Mets.