This HAS to be rock bottom!!

Just when we think things can’t get any worse for the New York Mets, they find new and exciting ways to screw up. They took failure to a whole new level Wednesday afternoon.

Despite the Mets’ recent struggles, they seemed poised to turn things around. They shipped Matt Harvey out of town, hoping to boost the morale of the club (plus he sucks). And they had the fortune of playing the WORST team in MLB, the Cincinnati Reds. A series win was a certainty, right?! WRONG!! The Mets lost 2-out-of-3 to the last place Reds in the most epic way imaginable. 2-1 F/10.

Picture This: Brandon Nimmo led off the game, watching three straight fastballs go by for a three-pitch strikeout. Wilmer Flores followed with a strikeout of his own. Asdrubal Cabrera then hit a flare down the left field line that landed in play and bounced into the stands for a ground-rule double. Jay Bruce, the next batter, was promptly called out, ending the inning.

THE METS BATTED OUT OF ORDER!!!!

Rally over. Inning over. Game over. 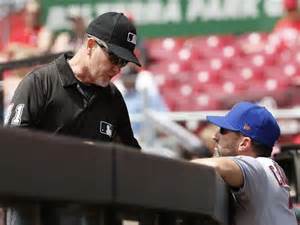 Tell me it doesn’t look like Mickey Callaway is being reprimanded by that umpire.

First year manager, Mickey Callaway, has repeatedly looked overwhelmed this season. He should crawl into a hole and stay there.

On To The Next One

The NBA’s Eastern Conference Finals will be a re-run from last year.

So will the NBA Finals.

Same show, different characters. Isaiah Thomas was pushed down an elevator shaft. Kyrie Irving switched to the dark side, but karma got him as he tried to hop the fence. Gordon Hayward joined the Green Jerks too, but only lasted five minutes before getting hit by a car. Instead, the Celtics have relied on a pile of young, hip actors, trying to play the part of hero in their first season. So far, so good. Ratings are up.

The problem though, for these young “punks”, they’re about to run into THE MAN. The lead actor everyone fears, but at the same time loves. You know him as the Denzel “I’m the motherbleepin’ man” Washington character. THAT MAN is LeBron James. And he’s about to teach these youngins a thing or two. “Old Man” LeBron still has a lot of tread on those tires, and is about to gun it into his eighth consecutive NBA Finals.

Catch ‘Episode One’ on Mother’s Day @ 3:30 P.M. EST on ABC. Because nothing says Happy Mother’s Day like watching basketball for three hours….