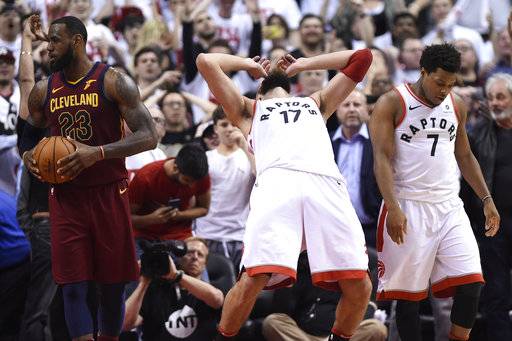 Despite trailing by 14 points after the 1st quarter (on the road), LeBron James never gave up. Despite shooting just 1-for-8 from 3-point range, and 1-for-6 from the free throw line, LeBron didn’t put his head down.

Instead, he persevered. He also did the CRAZIEST THING EVER….

He relied on the band of misfits he calls teammates to drive the LeBrons to victory. Without the efforts of J.R. Smith, Kyle Korver, Jeff Green, and Tristan Thompson, the LeBrons would be staring a 1-0 deficit in the face. Instead, a 113-112 F/OT victory flipped home court advantage upside down.

It must have felt nice to not have to play 1-on-5 for 48 minutes — for once. Even crazier than imaginary teammates coming to life, is LeBron’s “bad nights” still turn into triple doubles (26 points, 11 rebounds, 13 assists, 2 blocks, and 1 steal).

It’s good to be King. 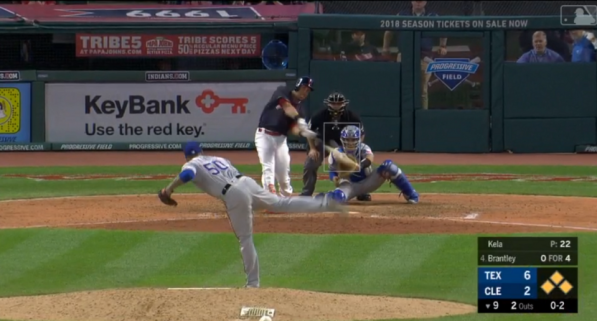 Not one, but two 9th inning home runs changed the landscape of Tuesday night.

First, down 6-2, down to their last strike, the Cleveland Indians’, Michael Brantley, took Keone Kela’s 0-2 breaking ball up-and-out for a game tying grand slam. That’s the stuff you dream about as an 11-year old in the backyard!! Despite the heroics, the Indians would lose 8-6 F/12.

There were three other extra inning games Tuesday (must have been a full moon).:

The other 9th inning dinger made me jump off my couch (literally jump). Gary Sanchez broke open a 0-0 tie, with a 3-run home run against the Houston Astros:

While I love the home run, my favorite part of the video, BY FAR, is Astros’ closer, Ken Giles, punching himself in the face!! HAHA.

El Gary’s long blast came after Justin Verlander mowed down the Yankees, allowing just 3 hits, and striking out 14, in 8 innings. But hey, a win, is a win.

Mr. Half Court Shot Is Back!!

Stephen Curry hadn’t stepped foot on a basketball court in 39 days. He could have fooled me….

Stephen Curry is the best shooter the NBA has ever seen. His range is limitless, and his ability to create his own shot makes him one of the most dangerous players in the world. Curry finished with 28 points, 7 rebounds, 3 steals, and 2 assists in just 27 minutes. He led the game with an insane +26 while he was on the floor. Yes, he was the sole reason the Warriors took down the Pelicans 121-116.

The NBA is LUCKY to have him back!!

What was the most exciting part of a wacky Tuesday evening?? Tell me all about it in the comment section below.

One thought on “Not Your Typical Tuesday”