Conor McGregor is an idiot!!

With the world at his fingertips, McGregor’s behavior has continuously disappointed. After his latest incident, his UFC career is in question.

The UFC hosted a media day event at Barclays Center in Brooklyn on Thursday for UFC 223. McGregor made an unexpected appearance at this event. And did he ever make is presence felt. McGregor was seen throwing a hand dolly through the window of a bus carrying other UFC fighters. While other members from McGregor’s entourage were seen throwing chairs and other objects at the bus, McGregor was restrained, and ultimately arrested. He will be charged with three counts of assault and one count of criminal mischief.

What a nice guy!!

TMZ Sports was able to obtain a video of the incident.

So, I can usually figure these situations out fairly easily. This one makes no sense to me. Is there some unknown “beef” between McGregor and another fighter?? Was this a publicity stunt by McGregor?? If this wasn’t staged, does this make McGregor the dumbest man in the world??

Obviously, if you launch heavy objects at a bus, breaking windows and injuring people, you’re going to get arrested. Chalk another one up for stupidity I guess. I hope UFC President, Dana White, bans McGregor from the UFC for life.

From one end of the spectrum, to the other, we go; The Masters!! 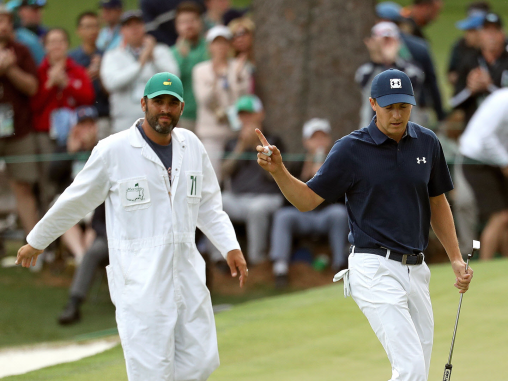 Round 1 of the Masters is in the books. Jordan Spieth, who generally plays well at Augusta, is the leader in the clubhouse at -6. Tiger Woods is 7 strokes back at +1. Rory McIlroy is just three stokes back at -3, and Phil Mickelson is hanging around at -2.

Jordan Spieth has an interesting history at the Masters. In 2015, Spieth dominated the Masters, becoming the 2nd youngest player to win a green jacket. He also broke the record for most birdies in a Masters (28). However, in 2016, Spieth encountered one of the biggest collapses in Masters’ history, blowing a 5-stroke lead heading to the back nine.

I’ve said it before, and I’ll say it again. The back nine, at the Masters, on Sunday, is a DIFFERENT WORLD. The nerves. The pressure. The sweat. Oh, the sweat….

Now, I know the whole world is excited Tiger Woods is back. And that’s great. But to think he can win this tournament is delusional. He should be pleased with making the cut, and finishing in the top-25. The game of golf, however, is Tiger’s #1 fan.

Who do you think will win the Masters?? Should Dana White ban Conor McGregor from the UFC?? Use that comment section….

2 thoughts on “Conor McGregor Is An IDIOT!!”