Can you smell it??

No, not what the Rock is cookin’; BASEBALL!! It’s February 12th. It should smell like freshly cut grass and pine tar in your living room by now.

While pitchers and catchers start reporting to spring training today (Pittsburgh Pirates and New York Mets), some of those lockers may remain empty for the foreseeable future. By my count, 107 free agents remain unsigned. Unprecedented and wild.

****We now take a break from your regularly scheduled program to make fun of the Mets: How is it that the Mets report their pitchers, catchers, and position players (February 17th) EARLIER than the rest of the league, yet still suck so badly????

With this year’s free agent market so unbalanced, the MLBPA (Major League Baseball Player’s Association) has decided to host a spring training camp for free agents. I guess teams should be pleased players will be staying in shape, but I can’t imagine heads around MLB are sleeping soundly on pillows every night….

What caused this problem??

There are many theories floating around in the ether. Union chief, Tony Clark, believes teams are “racing toward the bottom”. MLB commissioner, Rob Manfred, thinks agents have “inaccurately assessed the market”. The bottom line is players want more money than they’re worth.

You are worth what someone is willing to pay you.

The Chicago Cubs decided Yu Darvish is worth $126 million (6 years). Contract incentives could push the deal as high as $150 million. Darvish’s new contract is the biggest of the offseason — so far. I, probably shouldn’t question Cubs’ president of baseball operations, Theo Esptein, but, ah, what the hell…. 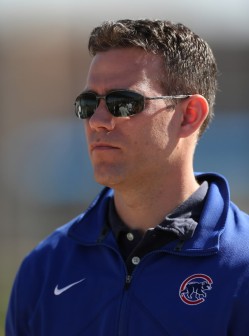 What is Theo Epstein thinking?!?! Yes, Yu Darvish is as talented a strikeout machine as anyone in MLB, but Yu can’t strike hitters out from the trainer’s room. Assuming 33 starts is a full season, Darvish has almost pitched 1 full season in his 5-year tenure in MLB (I know he pitched 31 games last year, but that doesn’t help prove my point). Darvish has started just 131 of a possible 165 games. Listen, not everyone’s Cal Ripken Jr., but I’d expect my 126 million dollar man to play more than 79% of the time.

One thought on “Yu Is Worth A Lot More Than You!!”