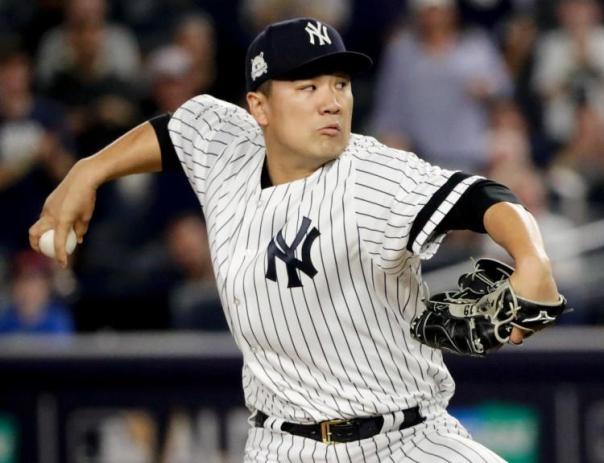 That was as exciting a 1-0 game as you’ll ever see.

With their back against the wall, the Yankees turned to their 155 million dollar man. It’s hard to earn an entire contract in 1 start, but Masahiro Tanaka came pretty close. Tanaka dazzled a sold-out Yankee Stadium, pitching an absolute gem:

He outdueled Cleveland Indians’ hurler, Carlos Carrasco. Carrasco was strong through 5 and 2/3 innings but lost his control in the 6th inning (issuing 3 walks). Despite Carrasco keeping the Yankees off the scoreboard, they did have the leadoff hitter on base in the 3rd and 6th inning.

Has the term ‘small-ball’ been wiped out of the baseball dictionary??

I turned to my friend Michael during the 3rd and 6th inning, and said, “Hey, remember when players used to bunt in this situation?” He completely agreed, especially in a pitcher’s duel, that a bunt would have been the smart play. What happened next, both times???? That’s right, A DOUBLE PLAY!!

The 6th and 7th innings would prove to be crucial in the outcome of this elimination game. With 1 out and 1 on, Francisco Lindor hit a fly ball to deep right field. And as nonchalantly as one could possibly rob a home-run, the seemingly 9-foot tall, Aaron Judge, reached over the wall and brought 2 runs back in the park.

It was like that scene in an animated film when the ordinary man transforms into a 40-foot giant in seconds.

Tanaka, and Lindor, reacted in the only way they could, the ‘tip of their cap’.

Hit the fast forward button to the bottom of the 7th inning. The Yankees were finally able to capitalize, on a Greg Bird, leadoff, moonshot to right field. There’s jacked up, and then there’s JACKED UP….Click here.

I wasn’t in the building, but all accounts from those in attendance drew parallels to the electrifying 1990’s and early 2000’s Yankees. There’s nothing comparable to a stadium, filled to the brim, with 50,291 screaming fans — in the Bronx.

So, the Yankees live to fight another day. Weather permitting, that day will be today. 1st pitch is currently set for 7:08 P.M. EST., but the forecast calls for rain to stop at approximately 8:00 P.M. EST. Take a nap today, for we may be in store for a long evening.

Their last starts were polar opposites. Bauer ran through the Yankees in Game 1 of the ALDS, allowing just 2 hits in 6 and 2/3 innings. Severino lasted just 1/3 of an inning, getting shelled by the Twins in the AL Wild Card Game.

The ultimate question is: Which Luis Severino will show up to Yankee Stadium tonight??

The Yankees’ season, hangs in the balance….