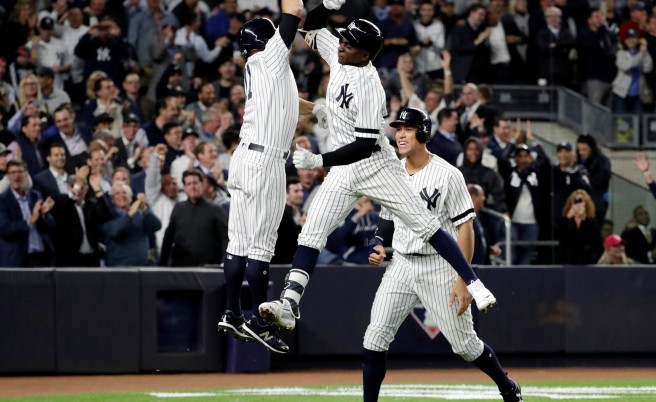 Apparently these are the 3 stages of watching the Yankees.

Yankees’ fans across the globe spent the first 20 minutes of Tuesday night’s AL Wild Card Game picking their jaws up from the floor. A leadoff home run by Brian Dozier stunned the capacity crowd at Yankee stadium. Luis Severino, making his postseason debut, quickly returned to the mound, looking to work past the early blunder. Little did he know, the ensuing Joe Mauer pop-out would be the only out he’d record.

Not your ideal outing.

Yankees’ manager, Joe Girardi, turned to Chad Green to play the part of savior, with runners on 2nd and 3rd and 1 out. Girardi most likely mumbled, “Good luck pal!” under his breath as he left the mound. Bringing in a relief pitcher in this scenario is like a general stranding his last soldier on an island when there was clearly time to rescue him.

Many are applauding Girardi for pulling Severino so quickly. I’m sorry, I thought applause was meant for exemplary action?? Not only was pulling Severino the only move, it was a move made 1 batter too late.

But Dave, it worked!! Why are you killing Girardi for a decision that worked?? Just because I can make a shot from half-court, doesn’t mean it was a good decision. In a 1-game elimination format, there is no tomorrow. Anyone watching Severino pitch could see he didn’t have it Tuesday night. This is not about feelings or emotions. It’s not about taxing the bullpen. It’s do or die. Win or go play golf. While the Yankees can put up numbers in a hurry, a 5-run deficit is not the same as a 3-run deficit.

While there were many enormous moments in Tuesday night’s game, none was bigger than Green striking out Byron Buxton and Jason Castro to shut the door on the top of the 1st inning.

Chad Green was the MVP of Tuesday night’s game.

Green re-energized the crowd, but Didi Gregorious re-defined energy in the bottom of the 1st inning. The crowd erupted the instant Didi connected with a 3-run home run that soared into the cool, Bronx air. It was an incredible moment that won’t soon be forgotten. Brett Gardner would put the Yankees ahead 4-3 in the bottom of the 2nd inning with a home run of his own. After the Twins evened the score at 4 in the top of the 3rd inning, it was all Yankees the rest of the way.

With the Yankees already up 5-4, Aaron Judge did what Aaron Judge does, he sent a ball into the bleachers. A ball that reached the bleachers in 3.72 seconds!! This put the Yankees up 7-4. And the Twins wanted to make sure Aroldis Chapman didn’t get a save, so they walked in a run, bringing the final score to 8-4.

While Chad Green stalled the Twins rally at the biggest moment of the game, the entire Yankees’ bullpen was the MVP of this game. David Robertson was phenomenal, providing 3 and 1/3 scoreless innings. He handed the baton to Tommy Kahnle who gave the Yanks 2 and 1/3 scoreless innings of his own. And in the last leg of the relay race, Aroldis Chapman struck out 3 in a scoreless 9th inning.

Now, the Yankees head to Cleveland to take on the Indians (AL’s Best Record). Game 1 of the AL Division Series (Best-of-5) will start @ 7:30 P.M. EST on Thursday.

Did you stay awake for last night’s game?? Who will win the ALDS?? Post your prediction in the comment section below.