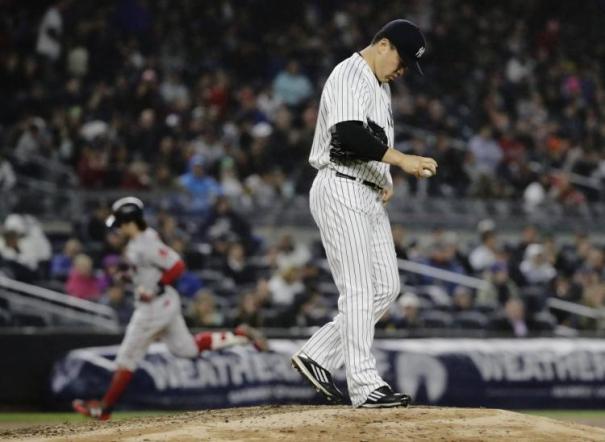 There is something wrong with Masahiro Tanaka. Entering an important 3-game series with the Boston Red Sox, Tanaka took the hill on Tuesday night. He has been, how do you say this, less than stellar so far this season. I’m being wayyyy to nice..HE’S PITCHING LIKE POOP!! That’s better. Tanaka’s struggles continued last night. He gave up 5 earned runs in just 5 innings, serving up 3 home runs. Chad Green and the Yankees’ bullpen gave their team a chance, holding the Red Sox to those 5 runs. The Yankees scratched and clawed their way back into the game, losing 5-4. Red Sox closer, Craig Kimbrel, recorded a 4-out save (his 17th of the season), and the Yankees’ lead in the American League East is now just 1 lonely game.

Let’s take a deeper look at Tanaka’s first 12 starts of the season. I’m going to hit you with some stats and numbers now, so dust off those thinking caps and slap ’em on….

He is the owner of a shiny, brand spankin’ new E.R.A of 6.55. He is averaging just over 5 innings per start and has now given up 17 home runs in just 66 innings. Not exactly a recipe for success. With all the question marks surrounding the Yankees’ starting rotation to begin the season, Tanaka was supposed to be the anchor. The rock. The immovable object. Yeah, not so much. In the first game of the year, Tanaka was shelled to the tune of 7 runs in 2 and 2/3 innings. And he has now given up 5 or more runs in 4 of his last 5 starts. Yikes!!

The question is: Is this the real Masahiro Tanaka or will this be just an ugly blip on the radar?? As a Yankees fan, I’m hoping for the latter, but I’m not sure. If you believe Tanaka’s 3-year MLB track record is enough to prove he will ‘right the ship’, then I’ll have what you’re having. You can check out his career stats here. If you’re too lazy to click there, here is a quick overview of Tanaka’s stats. Entering this season, Tanaka had an impressive E.R.A. of just over 3.00 and sported a W.H.I.P. (Walks + Hits / Innings Pitched) around 1.00. He had struck out just over 8 batters per 9 innings, and had won at least 12 games every year. Those numbers represent the ace of your pitching staff. Not the guy who’s being outpitched by 36-year old, C.C. Sabathia.

The Yankees first 55 games have shown they are contenders. The young roster is filled with exciting offensive talent, their bullpen is fantastic, and their starting rotation as a whole has exceeded expectations. The 2nd question is: How long can they continue to run this version of Masahiro Tanaka out to the mound every 5 days?? I’m also not sure of the right answer here, but I have an idea. If I were the Yankees, I would put Masahiro Tanaka on the fake disabled list. I’d have the trainer conjure an elbow injury out of thin air, and I’d place Tanaka on the 10-day disabled list. This could give him time to get his mind right and focus on pitching deeper into games and deeper into the season. IF the Yankees are going to make the playoffs, Masahiro Tanaka needs to pitch better. Aaron Judge and Gary Sanchez can only bail out their pitchers so many times before the well runs dry.

Will Masahiro Tanaka turn his season around?? Will the Yankees make the playoffs?? Give me your opinion in the comment section below.

4 thoughts on “Will The Real Masahiro Tanaka Please Stand Up”