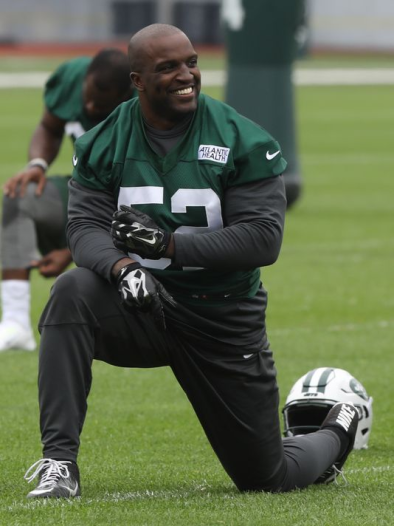 The NFL life is not always a glamorous one. I’m sure the players enjoy their lofty salaries, being a celebrity, and playing a game for a living. But sometimes, players loyally suit up for 1 team for 10 years, work their tail off, and exhibit excellent leadership, only to be sent packing out of the blue (or in this case green). Enter David Harris. Harris has been a staple in the New York Jets organization for 10 years. He was drafted by the Jets in the 2nd round (47th overall pick) in 2007 out of the University of Michigan. Harris has been extremely durable, playing in all but 6 games in his 10-year career.

I think it’s a shame the Jets cut Harris. In an NFL era of constant player movement, it is rare to see someone play for only 1 team for an entire decade. If you opened up David Harris, I’m sure green blood would spill out. He has had a very good career as a middle linebacker and can still contribute, even at the age of 33. He has been class personified and has always been a great leader. Whoever signs him for $2 or $3 million will find it was money well spent.

Harris was due to make $6.5 million in the upcoming season, so I understand the Jets desire to cut that kind of salary in the midst of super-duper tank mode. But, there is a right way and a wrong way to do things. This lands firmly in the wrong column. Why did the Jets need to wait until June 6th to cut Harris?? Couldn’t they, out of respect, have cut him prior to the draft?? Or prior to free agency?? This would have afforded him a better opportunity to find employment this season. It also would have benefitted the Jets, as they would have had a better idea of their own needs on D-Day (draft day). Apparently waiting until the middle of OTAs was the way to go..way to keep it classy New York.

I know I know, the NFL is strictly business..all the time. Well sometimes you need business in the front and a party in the back. Ya know..mullet style. But no seriously, if you operated your small business the way the NFL does, no one would work with you ever again. The NFL is a monopoly though, and the billionaire owners have complete control over their players. Every year players are at the mercy of team owners. Harris is ‘Exhibit A’. Eric Decker is ‘Exhibit B’. From the Jets’ perspective I fully understand the moves. They are dumping salary, dropping older players, and preparing for 2018 and beyond. For the long-term success of the Jets’ franchise it makes sense, but hey, maybe there’s a reason why they are constantly viewed as a circus. If I could only put my finger on it….

How do you feel about the Jets cutting David Harris and Eric Decker?? Let your feelings out in the comment section below.