Many different paths often lead to the same place. For some, that place is familiar. For others, it’s folklore. That place is the Super Bowl. To understand how the New England Patriots and Philadelphia Eagles’ paths led to Super Bowl LII, we must look to Championship Sunday: 1 part same old story, 1 part shock and awe….

What Else Is New?!

No Gronk, no problem.

The New England Patriots deserve praise. Hell, they deserve their own holiday on the calendar. What the Patriots continue to do, against the toughest of odds, is incredible. The Jets fan inside dies a little bit every time I compliment the Patriots.

In any significant Patriots’ victory, there’s always a play that stands out. A play you can point to, and say, there it is, NOW they’re going to win. Most teams wouldn’t understand. 3rd & 18, down 10, with 10:49 to play, Brady connected with Danny Amendola for a 1st down (21 yards). It sounds simple, but it embodies the Patriots’ spirit. This is why scoring a game-winning touchdown, with 2:10 to play, is not as dramatic as it sounds. A Patriots’ victory was never in doubt. 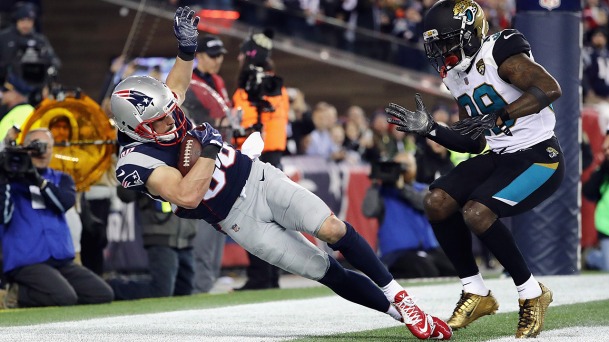 The Jaguars, however, deserve credit (sort of). They played a near perfect 1st half, carrying a 14-10 lead into the locker room. The offensive play calling was perfect, easy throws for Blake Bortles and plenty of rushing attempts. Bortles impressed, completing 17 of 23 passes (73.9%) in the 1st half. But then, Bortles turned back into a pumpkin, going 6 for 13 (46.1%) in the 2nd half. And that, as they say, was all she wrote.

With their 24-20 victory over the Jacksonville Jaguars, the New England Patriots will play in their 8th Super Bowl in the last 17 years (10th appearance in their history). They’ll look to win back-to-back Super Bowls for the 1st time since 2004, when they defeated the Eagles (24-21). For New England, the cast of characters are practically the same. As for Philadelphia, it’s a lifetime ago.

I Did Not See That Coming!!

The Philadelphia Eagles entered the NFC Championship as underdogs. They left as champions. Despite being underdogs in consecutive games, the Eagles have overcome. Doubt. Injury. Public perception. They overcame it all and find themselves in their 3rd Super Bowl in franchise history.

If you tried to adjust your television set during yesterday’s game, you weren’t the only one. I thought there was a Tom Brady sighting in both games too. Yes, Nick Foles played that good of a game. Foles, who finished with 352 yards passing and 3 touchdowns, tore up a stringent, Vikings defense. This was a Vikings defense who ranked top-5 in nearly every statistical category during the regular season.

After a dramatic win over the Saints in the Divisional Round, it appeared the Vikings were simply happy to be here.

The Vikings marched down the field on the opening drive for a touchdown. Then continued to force a punt on the Eagles’ 1st possession. The city of Philadelphia was probably collectively hurling things at their TVs. But after an interception returned for a touchdown, it was all Eagles. With 14:10 left to play, the Eagles took a 38-7 lead, and I, turned off my TV.

Did you doubt the Patriots yesterday?? Did Nick Foles play the best game of his career?? Tell me the truth in the comment section below.

One thought on “All Roads Lead To The Super Bowl”