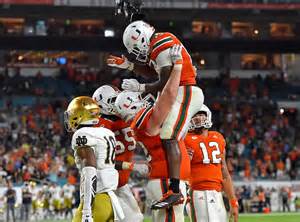 It was chaos. Mayhem. Cats and dogs living together. It was just what the doctor ordered for any true college football fan. Multiple teams were dropped from the college playoff ranking this week after embarrassing, blowout losses. Monkey wrench, thrown in….

Notre Dame dropped from #3 to #8 following a beat down of epic proportions by Miami. With fate in their own hands, and a 1-point loss to Georgia as the only blemish on their resume, Notre Dame folded like a cheap suit. 41-8 is not the storybook ending the Fighting Irish were hoping for. ‘The U’ happily took Notre Dame’s #3 ranking this week.

Georgia also took a tumble, from #1 to #7, thanks to a crushing 40-17 defeat at the hands of the Auburn Tigers. Auburn is now knocking at the door at #6 despite having 2 losses on their record. With a showdown with now #1 Alabama just 2 weeks away, that monkey wrench may get a lot bigger. Auburn being a crucial part of this year’s college football playoff equation, is irony at its finest. For a refresher of the effects of Auburn’s 2004 undefeated season, click here.

In 2014, the NCAA (finally) changed their postseason format to a 4-team, bracket-style, playoff. This has added intrigue to college football, as more teams remain in contention for the national championship. And just 4 seasons since its inception, the college football playoff must evolve again.

The world needs the college football playoff to expand to 8 teams.

The playoffs, in any sport, are used to narrow the field, in order to determine a champion. The challenge, in every sport, is to draw a line in the sand in determining that field.

Here are the current playoff fields for every sport you care about:

As you can see, college football is behind the times. Rather than be reactive, college football should be proactive. Expanding the field to 8 teams would increase and prolong viewership, without watering down the playoff field. While I understand there will be ‘an odd man out’ in any format, this would alleviate a lot of headaches (and crying).

There are no logistical issues in the way, only approval from the powers that be. While this idea is awesome, and can be implemented next year, don’t hold your breath.

Do you think the college football playoff should be expanded to 8 teams?? If not, post your format idea in the comment section below.