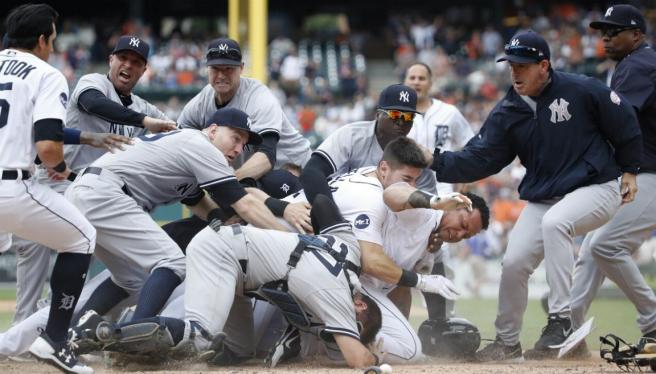 Drama. Intrigue. Altercations. Retribution. Betrayal. You’d think I was talking about a movie or soap opera, rather than Thursday’s day-game between the New York Yankees and Detroit Tigers. If you missed it, all I can say is, WOW!!

Of the many different angles to examine this, it’s difficult to do it justice, but I’m going to give it a good old college try.

1st, we must come up with a Headline….

A Headline should be catchy. It should grab the reader’s attention and give them a reason to click on your article. Some days, creativity meanders. Other days, like today, the options are plentiful:

Which is your favorite??

2 outs. Top of the 5th inning. The Yankees are winning 3-2. Michael Fulmer of the Tigers is on the mound, and Gary Sanchez steps to the plate.

Very important Side Note: Gary Sanchez hit a home run in the 4th inning, his 4th of the series.

Michael Fulmer proceeds to hit Gary Sanchez, presumably because Sanchez is KILLING the Tigers. As ridiculous as that justification is, it’s the truth. Gary Sanchez has 4 home runs and 9 r.b.i.’s in the series, so Fulmer made him “pay”. Little did Fulmer know, he had just set in motion a hideous chain of events.

In the bottom of the 6th inning, Yankees’ reliever, Tommy Kahnle, took matters, and the ball, into his own hands. He fired a pitch behind Miguel Cabrera, and Kahnle was immediately ejected from the game. Yankees’ manager, Joe Girardi promptly went ballistic, causing a scene while getting ejected. Girardi most likely blacked out during his tirade but argued Kahnle’s ejection, without warnings issued, wasn’t justified. Girardi also pointed to Fulmer remaining in the game.

*Girardi was right. This is on the umpires. Issuing warnings could have prevented this whole situation.

Romine and Cabrera were both ejected, however Gary Sanchez SHOULD have been as well. While a Yankees and Tigers’ player were wrestling on the ground, Sanchez threw a sucker punch at the Tigers’ player. I am a Yankees’ fan, but this was terrible!! I LOST A TREMEMDOUS AMOUNT OF RESPECT FOR GARY SANCHEZ YESTERDAY!! Don’t be surprised when Sanchez lands on the suspension list.

My favorite part of this was the argument that took place in the Tigers’ dugout between Justin Verlander and Victor Martinez. Verlander wasn’t a happy camper when Martinez could be seen having a friendly conversation with Sanchez. I gotta side with Mr. Verlander here….

What took place in the bottom of the 7th inning is what’s wrong with baseball.

Dellin Betances struck Tigers’ catcher, James McCann, in the head with his 1st pitch. This is frightening. This is dangerous. THIS WAS INTENTIONAL. And this shouldn’t be allowed. Baseball’s unwritten rules and the acceptance of pitcher retaliation is absurd. Yes, Betances was simply retaliating. But he could have killed McCann. Is that what it’ll take before there is a ZERO tolerance policy for head-hunting?!?! A Death?!?! I hope MLB smartens up before it’s too late. Some clichés, better safe than sorry, ring true.

As if that wasn’t enough fun for 1 game, Tigers’ reliever, Alex Wilson, plunked Todd Frazier in the 8th inning, bringing our grand totals to:

The ultimate question is, who will be suspended, and for how long??

My guess is Dellin Betances, Gary Sanchez, Austin Romine, and Miguel Cabrera will receive suspensions. Betances and Sanchez should receive twice as many games as Romine and Cabrera. Period.

Did you watch this ridiculous game?? How long should suspensions be?? Tell me in the comment section below.

2 thoughts on “The Sucker Punch Heard Round The World”