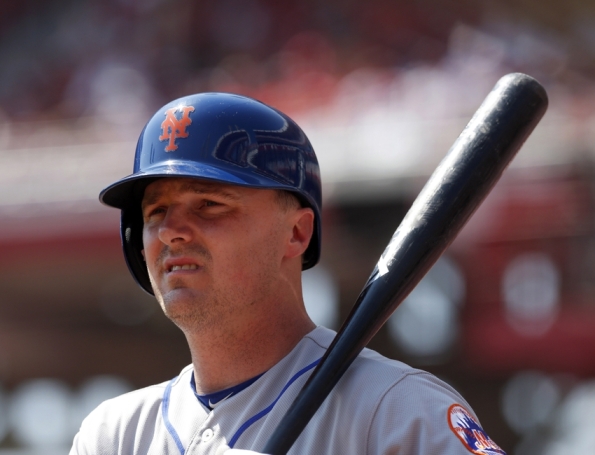 Making fun of the New York Mets never gets old. You may say that’s mean, but if it’s always true, how mean could it be?? The Mets are bad on so many levels. And Wednesday night, they took their stink to new heights. They traded Jay Bruce to the Cleveland Indians for a bucket of chicken — literally. Okay, not literally, but they might as well have. Because trading Bruce to the Indians for 30th round draft pick, Ryder Ryan, a relief pitcher, is not exactly a good R.O.I. (return on investment). Check out Bruce’s impressive season here. The Mets, as usual, kept money as their biggest concern. They received better offers for Bruce elsewhere, but dealt him to the Indians because they took on $5 million of his salary. Wow!! That’s good stuff. It’s days like these I’m overjoyed NOT to be a Mets’ fan.

Raise your hand if you’ve heard of Thorbjorn Olesen and Kevin Kisner???? Yeah, me neither. These fine gentlemen are your 18 hole, co-leaders (-4) at the PGA Championship. I must give credit when credit is due. My guest co-host on my sports talk radio show, Uncle Mike, predicted Kevin Kisner would win the PGA Championship. I may have laughed in his face when he said this, but I bet he’s the one laughing now. Kisner, while relatively unknown, is the 25th ranked golfer in the world. This speaks to the state of golf, doesn’t it?? Imagine if no one knew who the 25th best basketball player was?? Kisner has Brooks Koepka nipping at his heels, at -3, and my pick, Jordan Spieth had a rough first day, finishing at +1. Check out the full leaderboard here. There’s a lot of golf yet to be played, so we’ll see how Kisner handles the grand stage today.

Zach Randolph is an idiot. There is no other opinion allowed in this situation. Zach Randolph was arrested early Thursday morning on marijuana possession with the intent to sell. This charge is a felony, and he was held on $20,000 bail. The LAPD found Randolph and a group of people drinking, smoking, and partying in the streets of Watts. Police backup was required as the crowd reportedly began slashing tires and smashing windows on police cars. Sounds healthy….

This story infuriates me. If you’re Zach Randolph, what the hell are you doing smoking and drinking in the projects?!?! And why do you have enough marijuana on you to get an entire city high?? Zach, you are 36 years old. You have earned $175,124,765 in your career. You are set to earn another $24,000,000 over the next 2 seasons. How freakin’ stupid can you be?!?! I know, other players do worse than this, but that doesn’t make this okay. And I want to shake the faces of the people who say this is not a big deal. Hey, just because this story involves marijuana, and some of you are potheads, doesn’t make this acceptable. IT’S TIME TO GROW UP ZACH RANDOLPH!!!!

What do you think of the Jay Bruce trade??

Who do you think will win the PGA Championship??

Answer my questions in the comment section below. Please.