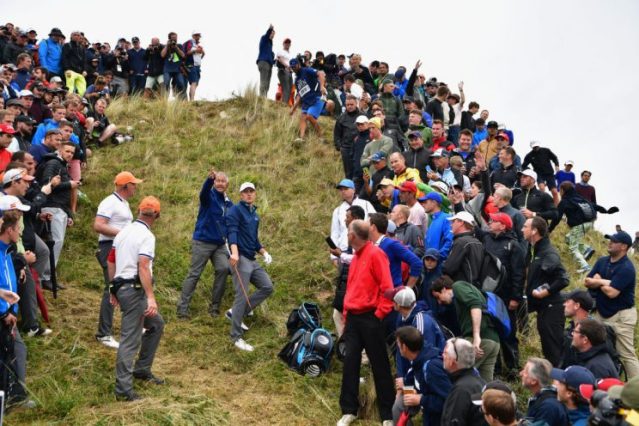 It was the most impressive bogey you’ve ever seen. Ever. Perhaps it was the most important bogey of Jordan Spieth’s career as well. Spieth carried a 3-shot lead into Sunday morning at the 2017 Open Championship. With only Matt Kuchar (#18 ranked golfer) in the rearview mirror, it was Spieth’s tournament to lose. After a bumpy start, his lead quickly evaporated on the front nine. Spieth, however, saved his magic tricks for the back nine….

Sunday at a Major does something inexplicable to a golfer. It toys with their emotions and puts their feet to the fire. Or it just sends them on the craziest roller coaster ride known to man. Jordan Spieth surely threw up in his mouth once or twice on Sunday’s roller coaster. It was probably like that Tower of Terror ride at Disney World. Yeah, please drop me, unexpectedly, in the dark, like 300 feet, while vomit rises into my brain!! Thanks Walt!! Anyway, back to Mr. Spieth’s Sunday afternoon….

Spieth bogeyed 3 of his first 4 holes. His birdie at the short, par-4 5th hole was crucial, as it kept him from completely unraveling. He would add another bogey at the 9th hole, and to the unforgettable back nine we go. After a string of pars, Spieth stepped up to the 13th tee. He proceeded to hit a tee-shot so far right, it almost left the country. Upon locating his ball, Spieth was forced to take an unplayable lie. This means Spieth would take a 1-shot penalty to be able to remove his ball from this treacherous lie. By rule (Rule #28 to be exact), he was allowed to place the ball on the same line of his original lie and the hole, as long as it was placed no closer to the hole. After what seemed like 14 hours of deliberation, Spieth walked back to a driving range!! He was then able to hit a blind shot (pictured above) up near the green. After a chip and a vital putt, it was this bogey that saved the tournament for Spieth. Then, the magic happened….

It was a sight to behold. It was one of those phenomenons you’d need to see to believe. Well, for now, you can believe me. I’m a trustworthy kind of guy. Before we get to the greatness of Spieth, we must recognize that his past failures were a major (see what I did there) contributor to his resiliency on Sunday.

Imploding at the 2016 Masters may have been the best thing that ever happened to his career.

Anyway, here’s what Spieth did on holes 14-17: birdie, eagle, birdie, birdie. Allow that to sink in for a second….

That’s what they’d call 5-under in the span of 4 holes, aka a dagger in the heart of Matt Kuchar. And it’s not like Kuchar choked under the pressure. He went 2-under over the same stretch of holes. Kuchar, gracious in defeat, said, “Sometimes you have to just sit back, and tip your cap.” And tip our caps we shall. Because Jordan Spieth’s performance yesterday was as good as it gets.

At just 23 years of age, Spieth is becoming the superstar golf has been longing for. He is now just a PGA Championship away from the career grand slam. He’ll get that chance at the 2017 PGA Championship. Quail Hollow Club in Charlotte, North Carolina will play host to the year’s final Major from August 10th-13th. By the way, Spieth’s 24th birthday is on July 27th, so I guess he just gave himself an early birthday present. Keep your eye on Spieth, as I feel he has all the tools to become the face of golf for years to come.

Did you watch the 2017 Open Championship?? Was it the most exciting round of golf you’ve ever watched?? Give me your opinion in the comment section below.

You can now find me on the Radio too. Download the TuneIn Radio App and search OWWR. I’ll be on live every Wednesday from 6:00 P.M. – 7:00 P.M EST. I also broadcast every show on Facebook Live via my DaveTalksSports.com Facebook Page.

5 thoughts on “A BOGEY Never Felt So Good”