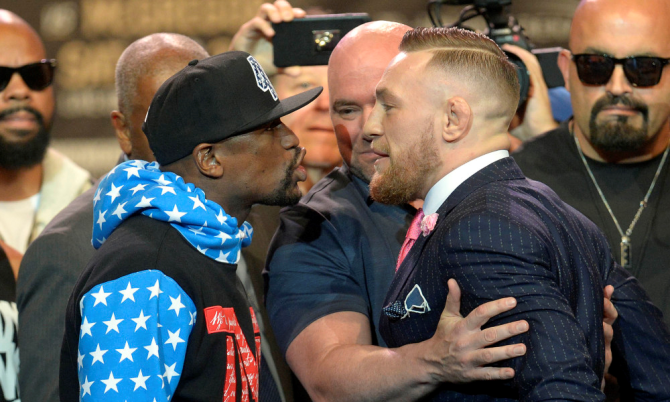 Do people actually buy into this crap?!?! Are there really people at home, sitting on the edge of their seats, jumping up and down every time Floyd Mayweather Jr. or Conor McGregor speak?? These must be the same people who think Jerry Springer is exciting television. Ahem..there’s probably a reason you’re home on a Tuesday, watching TV, at noon….

Tuesday’s “Press Conference” in Los Angeles represented the 1st of 4 majorrrrrrrr $$$$ grabs. It’s like one of those booths you get in and try to grab the singles as they fly around in the wind, only in this case there are 100 dollar bills — and there’s no wind.

For 4 consecutive days (7/11 – 7/14), we will be force fed Mayweather’s fake smile and McGregor’s bravado. This is a “Promotional Tour”, being used to hype up their fight to obscene levels. Well, I’m not buying it. Not this week. And not on August 26th. This “Tour” will also stop in Toronto, Brooklyn, and London.

If you want to watch the entire “Press Conference”, click here. Allow me to warn you..it’s throw-up worthy. Even if you watched the “Press Conference”, you may have missed a minuscule detail. A detail that showcased the “class act” that McGregor is. HA! This jack wagon had a custom suit made with the tiny letters “F*** You” stitched all over his suit. So what appeared to be pinstripes were actually terms of endearment directed at his foe, Floyd Mayweather Jr. You Stay Classy Dublin!

See, this fight isn’t a fight. It’s a circus act. It’s an opportunity for 2 guys to make inordinate amounts of money in exchange for ‘Reality TV’ entertainment. Ya know, like that scripted stuff we used to watch at age 10 — “Professional” Wrestling. Now, I don’t believe the Mayweather/McGregor fight is scripted, but it might as well be. McGregor has ZERO chance in this fight. Hell, the only reason this fight was sanctioned is because everyone’s palms are being greased. Sit back and look at the big picture here..this is a 49-0 boxer vs. a guy who has never fought a professional boxing match. That’s like me getting in the ring with Mike Tyson. Sure, he’s old, and fat, and crazy, but he’d whoop my ass.

The big difference in this fight, however, is Floyd Mayweather Jr. DOES NOT knock people out..EVER. So for those who decide to pony up the $100 for this pay-per-view event, cough..don’t do it..cough cough, you will be extremely disappointed. You may even feel cheated. This fight will go as every Mayweather fight has gone in the past 19 years: jab, jab, hide behind his shoulder, jab, dance around, hug, and repeat. The result will be a unanimous decision in favor of Mayweather (McGregor won’t win a single round). Following the fight, UFC, boxing, and sports fans all over the world will criticize Mayweather for not knocking McGregor out. Criticize yourselves.

Ultimately, this spectacle will be good for people who like money and good for the UFC. On the other hand, it will be devastating for boxing.

I never thought I’d say this, but you’ve lost a fan, for life….

Will you watch this fight?? Did you enjoy Tuesday’s “Press Conference”?? If so, please try to rationally explain why in the comment section below.

3 thoughts on “Don’t Be A Dummy, Save Your Money”