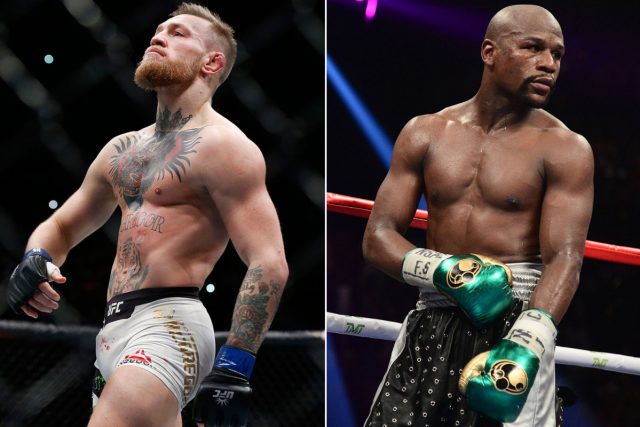 What a joke!! Rather than being some super-hyped, super-fight, this should be the laughing stock of sports. Floyd Mayweather Jr., one of boxing’s most accomplished fighters ever, is coming out of retirement to fight Conor McGregor, the UFC’s ‘flavor of the month’. Well, I guess it’s true what they say..every man has his price. Granted, in this case, the price is really freakin’ high. Mayweather is projected to make approximately $100 million for 36-minutes of “work”. For a second I almost forgot Mayweather’s nickname is “Money”. McGregor is projected to make slightly less, however, I’m sure he’ll rest his oversized, Irish head just fine on that fancy pillow when he brings home approximately $75 million.

This may be the most predictable fight in boxing history, but before I tell you what’s going to happen..I bring you the details:

Where: T-Mobile Arena in Las Vegas

For those who thought this could potentially be a Mixed Martial Arts fight, allow me to laugh in your face, HAHAHAHA. Sorry about that. If you thought Floyd Mayweather Jr. was going to come out of retirement to get his face kicked in, you were sorely mistaken. UFC and Boxing, despite their similarities, are 2 completely different sports. And that is the part people DO NOT understand. Conor McGregor can talk all the trash he wants, but the fact is, he has ZERO chance in this fight. ZERO. As in Nada. Zilch. Diddly-Squat. But Dave, what if he catches him with a……Nope, not gonna happen. Hell, McGregor isn’t even regarded as the best boxer in the UFC (Stipe Miocic probably holds that honor).

While this may become the greatest money making spectacle boxing has ever seen, in reality, it’s an amateur-hour special. Floyd Mayweather Jr. is 49-0 as a professional boxer. McGregor is 0-0. The fact that the Nevada State Athletic Commission is actually sanctioning this fight is ridiculous, but hey, money makes the world go ’round.

Tale of the Tape

Now, I will give you a step-by-step breakdown of the fight. You can print this out, carry it around for nearly 2.5 months, and follow it during the fight as if it were a textbook. This fight will go like Mayweather’s last fight (which was almost 2 years ago already – 09.12.15), and the fight before that, and the fight before that. Mayweather will very occasionally hit McGregor with precise jabs, and then dance around McGregor for the majority of the 36-minute bout. If Mayweather finds himself REMOTELY close to danger, he will give McGregor a nice little hug until the referee separates the love birds. McGregor’s frustration will become glaringly visible. The only wild scenario I can picture, and this would be AWESOME, is if McGregor loses his cool in like the 6th round and just roundhouse kicks Mayweather in the face. He’d be disqualified of course, and Mayweather would most likely be unconscious, but that would be Must-See TV!!

Expect the Pay Per View cost to be the same as Mayweather vs. Pacquiao ($100), and expect the fight to start past your bed-time (probably 10:30/11:00 P.M. EST). Also expect, and heed my warning, to be really disappointed you spent $100 bucks on this dumpster fire. Mayweather has only knocked out 1 person in the last 19 years, and McGregor is still trying to figure out how to get his boxing gloves on (they’ll fight with 10-ounce gloves).

Now, as we speak, you can bet on the fight. The opening line on the fight is Mayweather (-800) and McGregor (+500). These odds are WAYYYYYYYYY too low. If I was a betting man, I’d be betting my life savings on Mayweather in a Unanimous Decision (which would bring him to a perfect 50-0). But Dave, I can get 5 to 1 odds on McGregor to pull off the upset. Yeah, and I can use $100 bills as toilet paper, but I don’t….

If someone else is buying, I’m watching, otherwise I’ll wait for ESPN’s highlights the following morning.

What do you think the result of this fight will be?? Are you crazy enough to think McGregor can win?? If so, PLEASE tell me in the comment section below.