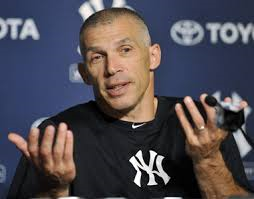 Two.  That is the total number of career saves potential New York Yankees closers Dellin Betances and Andrew Miller have COMBINED.  Friday morning, Yankees manager Joe Girardi announced that he will not designate an official closer for the upcoming season.  To some, this appears that Girardi simply can’t decide between Miller and Betances.  To me, I believe Girardi is hiding behind Betances’ horrid spring in order to break tradition.  Girardi wants to become the first Manager to do away with the ‘closer’ title.  He wants to put the pitcher that best fits a given situation in the game to give his team the best chance to win; period.  I’ve never been a big fan of Girardi, but this ground breaking move would impress me.  There is a possibility that this situation corrects itself if one man out duels the other, however, I think Betances is pitching hurt.  Usually when a pitcher’s velocity suddenly drops significantly, there is a lingering injury waiting to show itself.

What do you think of Girardi’s decision?  Do you think every team should designate one official closer, or should we do away with the title ‘closer’ all together?

Since you enjoy my writing, follow me over to intheneutralzone.com where I am a contributing author there as well. Also you can follow me on twitter @DaveEttinger2 or like me on Facebook at http://www.Facebook.com/DaveTalksSports. Thanks for reading, and I hope you enjoyed it!