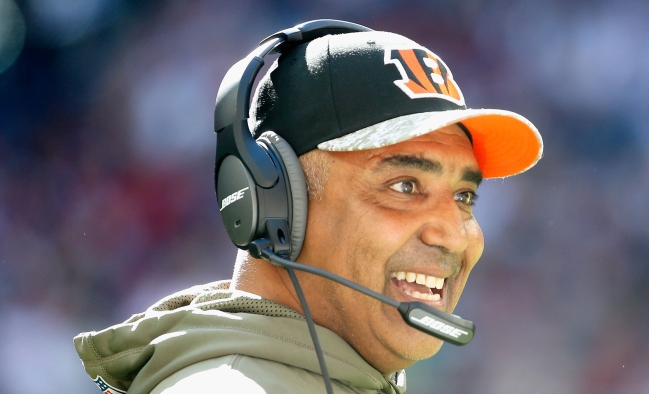 Tanking; To deliberately lose games to ensure a higher draft pick. This is a highly controversial strategy that causes fans to root against their team in the short term in exchange for long term success. Some teams are good at it; the 2011 Indianapolis Colts (2-14). Others, not so much; the 2017 New York Jets (5-11). What if I told you there’s an NFL franchise PERMANENTLY tanking?? How do I become a fan of that team?!

The Cincinnati Bengals have no interest in winning. They don’t want to win playoff games. And they certainly don’t want to win a Super Bowl. Extending head coach, Marvin Lewis’ contract through the 2019 season, guarantees failure. It solidifies the Bengals’ position in ‘Tank-Mode’.

Marvin Lewis has been the head coach of the Cincinnati Bengals for 15 years. Go back, and read that again. Take your time. I’ll wait….

The craziest part is Lewis is the 2nd longest tenured head coach in the NFL (only to Bill Belichick).

During Lewis’ decade-and-a-half in Cincinnati, they’ve won ZERO playoff games. Yes, he’s made the playoffs 7 times (hosting 4 of those games), however, they came home empty handed every time. If I’m a Bengals’ fan, I’m not sure how every television set in my house isn’t broken. It’s not like this extension came after 2015 (when the Bengals won 12 games). No, no, this extension comes after 2 consecutive losing seasons. And reportedly, Bengals’ owner, Mike Brown, had to convince Lewis to stay. SAY WHAT?!

Is there something I’m missing here?? Isn’t the point of professional sports to win championships?? And isn’t it evident Marvin Lewis is incapable of doing that?? So, how is it possible, in the day and age when coaches are typically given a 2-year leash, Marvin Lewis has survived 15 years of tanking????

Yes. Yes. Yes. I have absolutely no idea.

Which brings me to the ultimate question: When is it acceptable to give up on your team?? When, as a fan, can you hang up the jersey permanently??

Loyalty is said to be the #1 attribute of any REAL fan. However, if the franchise you root for continuously exhibits irresponsible behavior, is it acceptable to leave them high and dry??

Today, if you’re a Cincinnati Bengals’ fan, feel free to jump ship. No one will kill you for it.

What do you think of Marvin Lewis’ contract extension?? Is it ever okay to give up on your team??