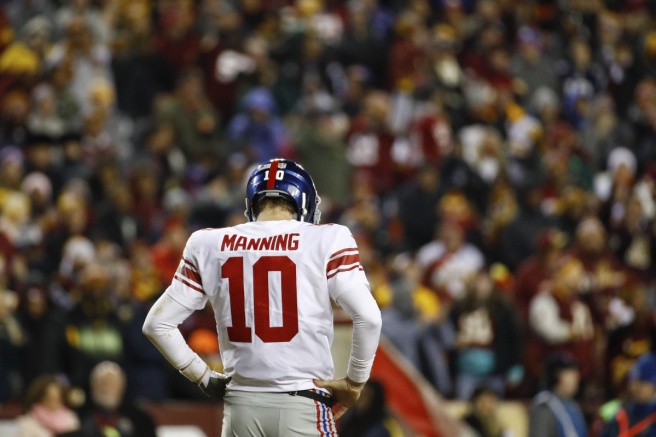 Eli Manning is being benched for the 1st time in his career….

*No need to adjust your TV set (or eyeballs). This is a real story.

Eli Manning has started every game in his career for the New York Giants. His consecutive games started streak, that currently stands at 210 (2nd longest in NFL history), will come to an end this coming Sunday. Allow me to remove any fluff other media outlets are adding to this story:

Anyone who knows me, knows I’m not Eli Manning’s #1 fan. In fact, I think he’ll rank as the 2nd worst quarterback in the Hall of Fame when it’s all said and done. Joe Namath will forever hold that wonderful distinction. But that’s no reason to treat a consummate professional this way.

Eli Manning has been a good soldier. He’s done everything the Giants’ organization has asked of him. He’s started every game of his 13-year career. And he’s won 2 Super Bowls.

He stands as the Giants’ best quarterback in franchise history. He ranks 7th all-time in passing yards. And he’s won 2 Super Bowls.

Generally, when a team is 2-9, they aren’t faced with the dilemma of benching an all-time great quarterback. However, this Giants team is taking unprecedented to a whole new level. Enter Geno Smith. The world already knows Geno Smith isn’t fit to be a quarterback in the NFL. Add this to the looooong list of things Ben McAdoo doesn’t know. I think we’ll put this right in between ‘how to comb your hair’ and ‘the meaning of embarrassed’.

I never thought the Giants would bench Eli Manning. They should have traded him at the deadline, but that’s a different story. I thought they’d let him start the rest of the season, and watch him don another team’s jersey next season. If you decide to bench Eli, you must play Davis Webb, as he is the only unknown here. And as poor of a decision as that would have been, at least McAdoo(dle) could have fallen back on ‘future of the franchise’. So, rather than fall on the sword, McAdoo is pushing Eli on that sword, in the most disgraceful way possible.

Oh yeah, coach McAdoo(dle) offered Eli the choice to continue starting games, and be pulled at halftime, solely to keep his games started streak alive. As always, Eli responded to that nonsensical notion in the only way a classy person can:

“Coach McAdoo told me I could continue to start while Geno and Davis [Webb] are given an opportunity to play,” Manning said. “My feeling is that if you are going to play the other guys, play them. Starting just to keep the streak going and knowing you won’t finish the game and have a chance to win it is pointless to me, and it tarnishes the streak. Like I always have, I will be ready to play if and when I am needed. I will help Geno and Davis prepare to play as well as they possibly can.”

At the end of the day, organizational decisions are approved by the person who signs the checks. At least they should be. Giants’ owner, John Mara, should be ashamed of himself. For Mara to allow McAdoo(dle) to make this decision, when McAdoo(dle) won’t be the head coach next year, IS ABSURD!!!! So rather than allow Eli Manning to ride off into sunset, the Giants are going to drag him through the mud first.

I guess there’s a reason the words classy and NFL organization don’t often collide in the same sentence….

Post your thoughts on Eli Manning’s benching in the comment section below. I know a lot of you have a lot to say, so don’t hold back.