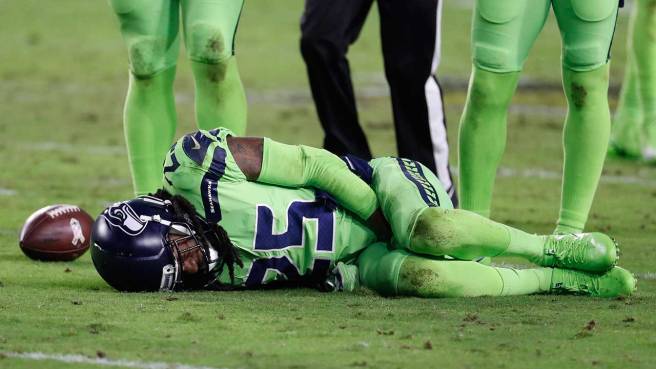 Thursday Night Football resembled a massacre rather than a football game. Not because one team got blown out, but due to the inordinate amount of injuries sustained in 60-minutes of action Thursday night.

6, yes you heard that right, 6 Seattle Seahawks left the game and did not return:

Sherman, the Seahawks top cornerback 7 years running, went down in the 3rd quarter with a ruptured achilles. Sherman will have season-ending surgery. The rest of the injured Seahawks are dealing with short-term injuries. If there’s a silver lining here, they’ll be afforded 11 days rest.

It’s literally the only positive to playing on Thursday.

As for the Arizona Cardinals, they lost 3 players as well:

After losing Carson Palmer for the season, 2 weeks ago, the Cardinals have tried to lean on their midseason acquisition, Adrian Peterson. Well, 29 yards, a fumble, and a safety later, Adrian Peterson had possibly the worst game of his career. At 4-5, with no serviceable quarterback on the roster, the Cardinals are staring another mediocre season in the face.

Oh yeah, there was a football game played last night. That Vegas is something else, isn’t it?? The Seattle Seahawks were 6-point favorites heading into last night’s game. So, of course, they won 22-16.

Seemingly the entire game was played through the air. Both teams combined for a whopping 89 yards from the running back position. That’s what they call — not good. Russell Wilson, however, is good. Check out his ‘Houdini’ act here. Insane right??

That set up Jimmy Graham’s 2nd touchdown reception of the game. Graham now has 6 touchdowns in his last 5 games. I’m glad Russell Wilson finally realized Graham is the best red zone target IN THE WORLD!! Yes, better thank Gronk. Gronk is amazing, but Graham can actually jump more than 6-inches off the ground….

The Seahawks will hobble onto their home field on November 20th, for a Monday Night Football showdown with the Atlanta Falcons. If you were wondering Russell Wilson’s worth, you’re witnessing it.

Can the Seattle Seahawks overcome the injury bug and make the playoffs?? Post your prediction in the comment section below.

2 thoughts on “Seahawks Win The Battle, May Lose The War”