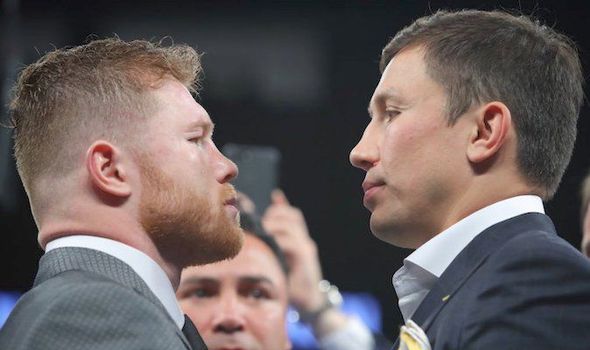 A boxing match can unify the world. That isn’t hyperbole. I truly believe (potentially) 36 minutes of battle, across the vast, 256 square feet of real estate inside the ropes, can unite people all over the world. Sports, tend to, and can hold a common ground for people of different race, culture, religion, and gender. Saturday night’s boxing match is a prime example of an opportunity for the farthest corners of the world to intersect.

When else can you find a man of Russian and Korean parents, raised in Kazakhstan, engage in competition with a man from Mexico, on Mexican Independence Day, in the United States?? The answer would be, um, never.

On Saturday, September 16th, Gennady Golovkin will square off with Canelo Alvarez in the middleweight division (160 pounds). Golovkin will put all 4 of his title belts on the line:

The fight will take place at T-Mobile Arena, in Las Vegas, and will be available on Pay-Per-View. Before we get to the main course, let’s taste test the appetizers. Here are the 3 undercards prior to the Main Event:

*There is at least 1 Mexican boxer in each match. I can only assume this is intentional due to it being Mexican Independence Day. The 2nd match consists of Golden Boy Promoter and famed boxer, Oscar De La Hoya’s cousin.

Now that we got the salad and crab cakes out of the way, bring on the sirloin steak.

Gennady Gennadyevich Golovkin, the champion, aka “GGG”, is 37-0, with 33 wins coming by way of knockout. He is 36 years old and stands at 5’10”. He is a hard hitting, orthodox (right-handed) fighter, who has never been knocked out. Hell, he’s never been knocked down. He brings tremendous power to the ring in the highest profile fight of his career.

Santos Saul Alvarez Barragan, the challenger, formally known as Canelo Alvarez, is 49-1-1, with 34 wins coming by way of knockout. He is 27 years old and stands at 5’9″. He is also a hard-hitting, orthodox (right-handed) fighter. Canelo has never been knocked out, as his only loss came at the hands of Floyd Mayweather Jr., by Majority Decision in 2013. While Canelo is technically the challenger, he is the bigger draw in this bout.

With the state of boxing in steady decline, in terms of popularity (not $$), I am genuinely excited for this fight. This championship bout brings 2 intense, tough, hard-hitting fighters together. Expect fireworks, early and often. They are similar in fighting style, and although Canelo has the slight age in the defense department, don’t expect any running and hiding. Both fighters are going to plant themselves in front of each other and exchange blows for (hopefully) 36 minutes.

This is going to be fantastic!!

While both fighters carry legitimate knockout power, both fighters have outstanding chins. Golvkin does hold an advantage in power, while Canelo has advantages in speed and endurance. Golovkin may be vulnerable if he looks for an early knockout. That could be Golovkin’s game plan, since he’s only gone the 12-round distance once in his career.

The ultimate question is, will Canelo’s unique combination of youth AND experience be enough to take down the older, undefeated Golovkin??

A Split Decision means the fight can go either way. No, I’m not hedging my bet, I just know how closely contested this fight is going to be. Sit back, or sit on the edge of your seat, and enjoy!!

2 thoughts on “Canelo vs. Golovkin (“We Got Ourselves A Bilingual Bloodfest”)”