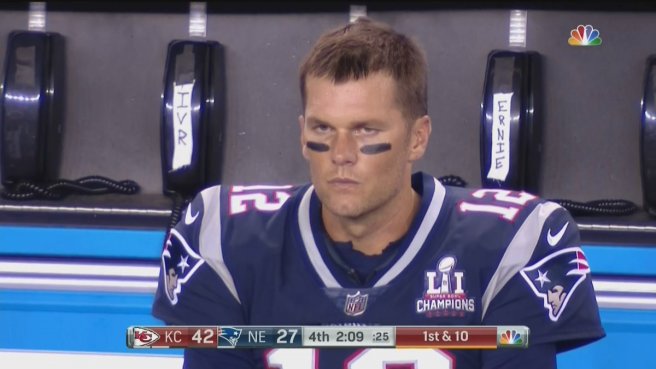 Everyone in the world makes assumptions. Football fans assume the New England Patriots will win every game. It’s true. Everyday for the past 3 months, I’ve had to listen to “experts” tell me the Patriots could go 16-0 this season. How’s that workin’ out for ya?!?!

Listen, the Patriots are a great franchise. They will be fine. They’ll still win the 12 games I predicted they’d win. Remember my AFC East Predictions?? But I must enjoy this moment. If you are like me, and fell asleep on the couch at halftime, you missed a thrilling game. Luckily, I DVR everything, so I was able to re-watch the Patriots “collapse”.

Let’s start with some insane Patriots’ statistics to put this once-in-a-lifetime happening in perspective:

Yeah, love ’em or hate ’em, the Patriots are really really really good. That’s what makes the Kansas City Chiefs’ performance so impressive. Alex Smith did his best Aaron Rodgers impersonation (368 yards, 4 TD’s, and 0 INT’s). The aforementioned Kareem Hunt put on a show. After losing a fumble in his 1st NFL carry (he didn’t lose 1 in 4 years of college), Hunt was on a mission. He finished with 148 rushing yards and 1 TD and 5 catches for 98 yards and 2 TD’s. And we can’t forget the defense. The Chiefs’ defense held Tom Brady to 16 for 36 passing (44.4 completion %), just 267 yards, and NO TD’s. OH, and they sacked him 3 times.

Despite everyone thinking Bill Belichick is impervious to criticism, allow me to blame him for something. Woah, woah, easy now Dave. When the Patriots were up 7-0, and the Chiefs turned the ball over, Belichick decided to go for it on 4th and 1 on the Chiefs’ 10-yard line. THIS IS WRONG!! I don’t care who you are, or what you’re trying to do. In the 1st quarter, you continue to put points on the board. If Belichick chose to go up 10-0, rather than turn the ball over and downs (and gift-wrap some confidence for the Chiefs), this game may have ended differently.

Allow me to rewind to the Pre-Game:

After the Patriots put on an absolutely nauseating pre-game ceremony, the game looked like it could get out of hand in a hurry. Speaking of that ceremony, I’m wondering how many people actually threw up before they were able to change the channel….

Now, as much as I’m reveling in this Patriots loss, I’ve been a Jets/NFL fan long enough to know what’s about to happen. Just like the time the Patriots lost 41-14 to the Chiefs (Week 4 of 2014), and everyone and their mother pronounced that the beginning of the end for Brady and the Patriots, something happened. And that something was the Patriots rattling off 7 straight wins, en route to a Super Bowl Championship.

Man do I feel bad for Drew Brees and the New Orleans Saints….

Did you enjoy this Patriots’ loss as much as I did?? What do you think their record will be for the season now?? Admit you were wrong, and then post your new prediction in the comment section below.