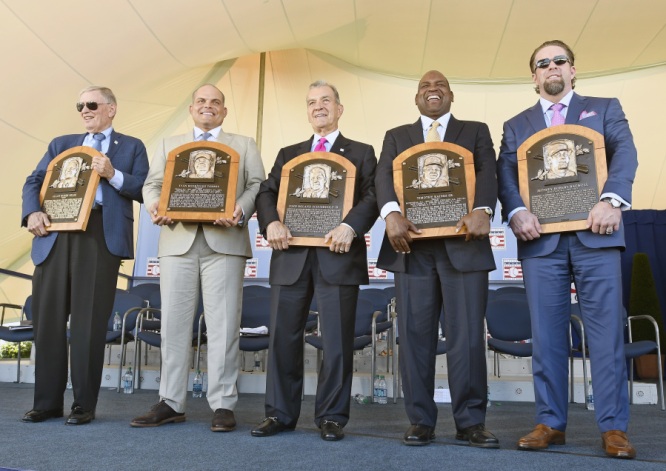 A small class of distinguished gentlemen will take their place amongst the all-time greats. The 2017 MLB Hall of Fame Inductees represent the wealth of talent that rounded the bases in the 1980’s and 1990’s. This year’s Inductees include:

Let’s start with “Pudge”. Ivan Rodriguez is regarded as one of the best defensive catchers of all-time. He was an absolute wizard behind the plate, winning 13 Gold Gloves over a 21-year playing career. Playing the majority of his career for the Texas Rangers, he also made stops with the Marlins, Tigers, Yankees, Astros, and Nationals. “Pudge” was voted in on his 1st ballot (76%), becoming just the 2nd catcher to share that honor (Johnny Bench). I was a fan of “Pudge”, especially when he jumped on the special sauce and decided to hit 35 Home Runs with 113 RBI’s and 25 SB’s in 1999. Oh, he also hit .332 while winning his only MVP. And now, his nickname makes more sense than ever. Anyway..Congratulations!!

Jeff Bagwell made a name for himself in the 1990’s, as the most powerful member of the “Killer B’s”. Bagwell now joins his former teammate, Craig Biggio, in the Hall of Fame. Bagwell graced the staged at Cooperstown on his 7th Ballot, garnering 86.2% of the vote. Bagwell’s career is absolutely Hall of Fame worthy. He won Rookie of the Year in 1991, MVP in 1994, and played all 15 of his MLB seasons with the Houston Astros. It’s a shame he had to wait 7 years to get in, but good things come to those who wait, right?? We can ask our next guest about that….

And then there’s Tim Raines. The man who waited 10 whole years to receive his invitation to Cooperstown. After playing 23 years in MLB, what’s another 10 right?? Raines received 86.0% of the votes required to get in. While I’m happy for Raines, I’m not sold on his Hall of Fame status. I believe it is the Hall of Greatness, not the Hall of Very Good. Raines was a phenomenal base stealer, who hit for average, but is the perfect example of a player who didn’t know when to ‘hang ’em up’. While there is something to be said for longevity, he stuck around for 3/4 years too many.

MLB inducted 2 other individuals into the Hall of Fame on Sunday:

Bud Selig was the Commissioner of MLB for 22 years. Over that span, he oversaw many changes to the game. He was vital in implementing the separation of each league into 3 divisions, interleague play, and revenue sharing. Despite heading up the league during the “Steroid Era”, Selig left MLB in better shape than he found it.

And last but not least, John Schuerholz. Schuerholz is regarded as one of the top General Manger’s baseball has ever seen. He spent 26 years working for the Atlanta Braves and Kansas City Royals. His resume speaks for itself: 16 Division Titles, 6 Pennants, and 2 World Series. Case closed.

And what’s a Hall of Fame Induction ceremony without a little Roger Clemens, Barry Bonds conversation?! As I’ve stated many times before, they should absolutely be voted into the Hall of Fame. Well, each year, both Clemens and Bonds’ votes continue to rise. This year, they each received approximately 54.0% of the vote (with 75% required to get in). This is up nearly 10% from last year. It is inevitable, so what are we waiting for?? Let them in, let them all in.

What do you think of the 2017 MLB Hall of Fame Class?? Are they all deserving??