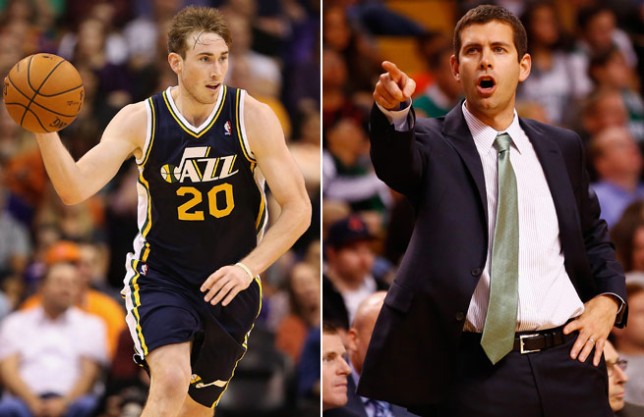 When everyone is running one way, are you willing to run the other way?? I bet you are if running the other way is smart as hell. That’s what former Utah Jazz star, Gordon Hayward did on Tuesday upon signing with the Boston Celtics. While every NBA star imaginable has been taking their talents to the Western Conference, Hayward packed his bags and headed East. This will help his legacy in a BIG way. Now, rather than having to get past the Thunder, Rockets, Timberwolves, Spurs, and Warriors to get to the NBA Finals (sounds fun), there’s only Big Bad Lebron James standing in Hayward’s way. Hayward may still come up short of reaching his first NBA Finals, but he certainly increased his chances. It’s all in the numbers.

The numbers that help Hayward sleep at night are the six 0’s at the end of his contract. $127,000,000 over 4 years (max contract). That’s what the Celtics have offered Gordon Hayward. This contract will cause a domino effect in Boston. The Celtics will need to pull the qualifying offer on that ugly guy they call Kelly Olynyk, waive Jordan Mickey and Demetrius Jackson, not re-sign free agents Gerald Green, Jonas Jerebko, and James Young, and trade either Jae Crowder or Marcus Smart. Those are the moves staring Danny Ainge in the face in order to clear the necessary salary cap space for Hayward’s contract. It sounds worse than it is, and it’s worth it.

Hayward is a very solid small forward. At 6’8″, he scores, rebounds, and plays defense. He is an outstanding addition to the Celtics’ roster. Check out his stats here. This signing does a few things. First, it reunites coach and player. Hayward played under Celtics’ coach Brad Stevens at Butler University. Stevens was the coach at Butler from 2007-2013, until he made the leap to the NBA. Second, it brings the number of teams that can actually compete in the NBA to 7:

The Warriors are still the team to beat. Kevin Durant just took a $9 million pay-cut to keep their team intact, so I like their chances.

The Spurs roster doesn’t look as formidable as it once did, but my days of doubting Gregg Popovich are over.

This is a very young but very interesting team. Don’t be surprised if in 2 years the Timberwolves are representing the Western Conference in the NBA Finals.

A walking triple-double and one of the best two-way players in the NBA sounds like a good combination to me.

How many point guards does it take to screw in a lightbulb?? Apparently 2.

Will this be the year Lebron’s NBA Finals streak comes to an end?? I wouldn’t bet on it, but the Celtics just made the road a little more bumpy.

And last, but for the NBA’s sake, hopefully not least, the Celtics. Does the addition of Gordon Hayward make them the best team in the Eastern Conference??

I still believe the Warriors will complete the 3-peat next season, but the NBA’s super teams are multiplying, setting up a more watchable NBA season. So, we’ve got that going for us….

Do you think the addition of Gordon Hayward makes the Celtics a legitimate contender?? Tell me what you think in the comment section below.