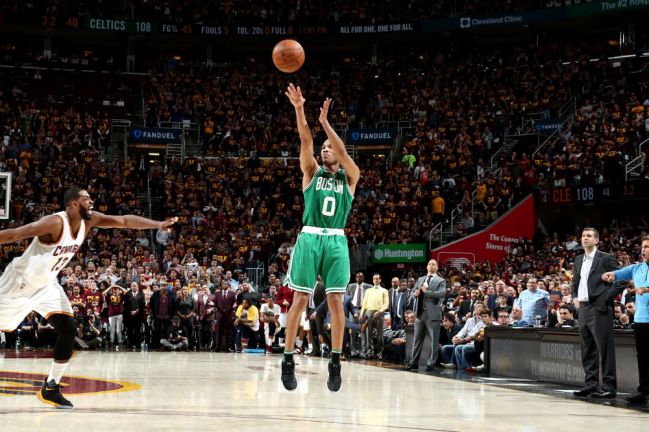 I did not see that coming. Neither did the Cleveland Cavaliers. Neither did anyone else in the world (besides the delusional Celtics fan). But, it’s like they say, there is a reason they play the game. If everything went the way it was supposed to, what would be the point of playing each game? With that being said, Game 3 of the Eastern Conference Finals was one of the most shocking developments we’ve ever seen. It is the reason we LOVE sports.

Let me set the scene:

The Boston Celtics didn’t just lose Games 1 and 2, they got demoralized. They got run out of the building, chased down the street, and forced up a tree to hide their shame. They lost both games on their home court (so much for home court advantage), including a 44-point shellacking in Game 2. As if that wasn’t enough, they lost their best player, Isaiah Thomas, to a torn hip labrum in Game 2. With everyone, myself included, looking past the Celtics to the seemingly inevitable NBA Finals rematch, they peaked their head around the corner and said, hey woah woah woah..we’re still here!!

Game 3 started just as games 1 and 2 did. It’s actually a miracle I didn’t turn the television off. The Cavaliers jumped out to an early lead, behind Kevin Love’s FIVE 1st quarter 3-pointers (1 shy of tying the NBA record for 3-pointers in a quarter). If you can guess who holds that record I’ll be very impressed….How’d you know?! It is none other than Antoine Walker. The Cavaliers were up by 11 after the 1st quarter, 16 at the half, and led by as many as 21. But the Celtics never gave up. They scratched and clawed their way back into the game, only trailing by 5 heading to the 4th quarter.

So do you want the good or the bad first?? Alright, I’ll start with the bad. It’s more like ugly, but I’ve been trying to be nice lately. Lebron James was AWFUL last night (Awful baby, with a capital A!!). His performance was reminiscent of James Harden’s stinker in Game 6 of the Western Conference Semifinals. If you need a refresher of that stellar bag of poop, click here. Come to think of it, it’s eerily similar to the Rockets’ loss to the Spurs, as the Spurs won without their best player too. Anyway, Lebron James finished with just 11 points on 4 of 13 shooting. He had just as many turnovers as he did assists (6), and he dropped as many points as I did in the 4th quarter….

He looked like he was allergic to the basketball in the 4th quarter.

And now, the good. The entire Celtics team contributed to their comeback win last night. 11 Celtics saw game action, with 6 landing in double figures. They were led by Marcus Smart’s playoff career-high 27 points. The entire Celtics roster showed their fortitude. Down 2 games to none, down 21-points with 6:39 left in the 3rd quarter, they could have curled up in the fetal position, but they didn’t. Instead, they drank some of ‘Michael’s Secret Stuff’, and they turned things around. Classic movie! The Celtics took the lead with 4:20 left in the game, and then it became a seesaw affair. With 10 seconds to play, the Celtics, with possession, had a chance to shock the world. The game was tied at 108, and Marcus Smart brought up the ball. He fed it to Avery Bradley curling off a screen just beyond the 3-point line, and Bradley let it fly. The ball hit every single inch of the rim, as the final seconds ticked, before dropping through the basket. And the Celtics did it!! They stormed back against all odds. 111-108 shined on the scoreboard as the Celtics celebrated on King James’ court.

Unfortunately, this fantastic effort was all for naught. The Cavaliers will win this series (most likely in 5 games now). Lebron James will return to superhuman form. And the sports world will get their super team matchup in the NBA Finals. God, I hope it’s better than Batman vs. Superman!! Expect Lebron to bounce back in a big way in Game 4 of the Eastern Conference Finals. Check it out by tuning into TNT on Tuesday night @ 8:30 P.M. EST.

Will the Celtics win another game in this series? Tell me your thoughts in the comment section below.