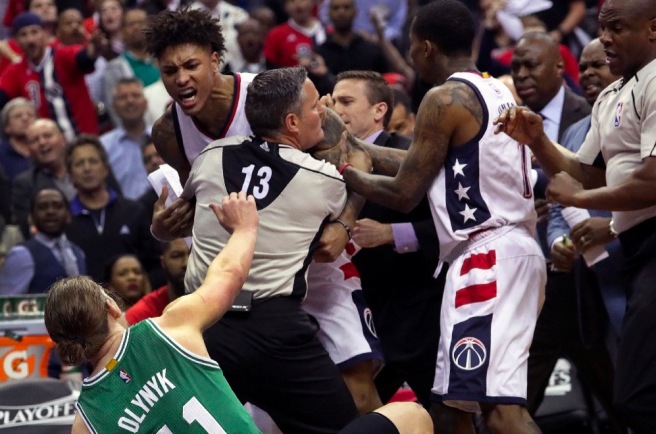 FIGHT!! FIGHT!! FIGHT!! FIGHT!! Reminiscent of two kids in a parking lot after school, fellow students circling, screaming for action, there was always immense build-up for a fight. There were, however, rarely any Mike Tyson haymakers landed. Usually Jimmy and Tommy would shove each other to the ground and maybe wrestle around for a minute until a teacher came to break it up. Yeah, that was last night. That’s what the Boston Celtics vs. Washington Wizards ‘fight’ was. There may be ‘bad blood’, as ESPN’s lead story would have you believe, but there were no tough guys ready to throw down. There were no Shaq size punches thrown. Only guys like Kelly Olynyk floppin’ around like a fish, and Kelly Oubre Jr. sayin’, “hold me back ref, hold me back!”

In the 2nd quarter, Kelly Oubre Jr. took exception to a screen Kelly Olynyk set on him. This made Oubre Jr. mad. After Oubre Jr. picked himself up from a masterful flop, he charged at Olynyk like a bull. Oh it looked nice, especially for T.V., but it was about as anti-climactic as Batman and Superman realizing their mothers share the name Martha. Wait, your name is Kelly?! No way man, my name is Kelly too!! We should be friends. Okay, sounds great! Oubre Jr. was immediately ejected from the game, and could face a suspension for Game 4.

The flippin’ and floppin’ didn’t stop there. In the 4th quarter, Brandon Jennings flopped about 17 times before getting in Terry Rozier’s face. Once again, no punches were thrown, however both players were ejected after double technical fouls were assessed. Game 3 saw 3 ejections and 8 technical fouls (including 1 on Wizards’ coach Scott Brooks). This is the most technical fouls in a playoff game since 2013. This behavior is a result of this season’s previous altercations between the Celtics and Wizards. To see a quick recap click here. I think Isaiah Thomas summarized it best: “We don’t like them, and they don’t like us.” Well said toothless wonder.

Oh, by the way, there was a basketball game played last night. The Wizards rolled past the Celtics 116-89. The Celtics now lead the series 2-1. Isaiah Thomas was held to just 13 points on 3 of 8 shooting from the field. Let me just say that the Celtics have ZERO chance in this series if Thomas only attempts 8 shots per game. I expect him to play better in Game 4, which can be seen on TNT on Sunday @ 6:30 P.M. EST. Each team has held serve, with the home team winning every game in the series so far. This series is only heating up so stay tuned. As a wise man once said, “A playoff series doesn’t start until a home team loses a game.”

Who will blink first and lose at home? The Celtics or the Wizards? Tell me in the comment section below.