You might be giving the Yankees a pass today, but I’m certainly not!!

They should have beaten the Astros in the ALCS.

They should be playing in the World Series.

But, they are not.

Apparently, when I do rain dances, they work.

Game 4 being postponed benefits the Yankees on many levels. Now, all they need is Gary Sanchez to pull his bat out of his a** and start hitting.

And one last time for good measure….

LeBron James, do us all a favor, and STOP TALKING!!!!

LeBron James has made himself perfectly clear, sort of, not really, well NOT AT ALL ACTUALLY!!

I wonder what it’s like to tell the world someone else is uneducated and then speak in unintelligible gibberish….

All those who said the Jaguars wouldn’t get Two 1st-Round picks for Jalen Ramsey look very silly right now.

The Yankees need to do a rain dance..in a hurry.

The Nationals will lose every bit of momentum they ever had and will lose in the World Series….in 5 games.

Have an awesome, rainy day!!!!

Aaron Boone mismanaged the bullpen in Game 2 of the ALCS.

But, the Yankees won a game in Houston, stealing home field advantage from the Astros.

That’s all that matters now.

The Yankees will handle their business, at home!!

Remember when every Mets’ fan in the world was telling you they were going to the World Series?!?!

Yeah, that was only about 2 weeks ago.

I wonder what THEY think now…..

By making ZERO moves at the trade deadline, the Yankees have made a FATAL MISTAKE!!

MLB might as well get it over with and give the Houston Astros The World Series trophy now.

Tuesday is my favorite day of the week.

Saturdays and Sundays are great, but Tuesdays never fail to turn that frown upside down. This past Tuesday, aka yesterday, provided a historic performance, a heated rivalry, and the dumbest trade ever. See, I told you Tuesdays are awesome!! 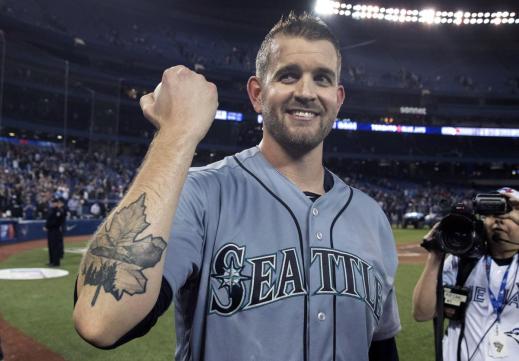 No, I’m not Canadian, but James Paxton is. Paxton, born in Ladner, British Columbia, made Canadian MLB history Tuesday night. He became the 1st Canadian born pitcher to throw a no-hitter — in Canada. Paxton’s Seattle Mariners kicked off a three-game series against the Toronto Blue Jays Tuesday night. The Mariners won 5-0.

Paxton cruised through the Blue Jays’ lineup, needing just 99 pitches to complete his no-hitter. He also hit 100 m.p.h. in the bottom of the ninth inning. Of course, as in virtually any no-hitter, it can’t be done without some help from friends. Mariners’ third baseman, Kyle Seager, made an outstanding diving play with two outs in the bottom of the seventh inning to preserve Paxton’s no-hitter. Following the game, Paxton acknowledged, and appreciated, his teammates behind him:

“What a defense tonight. That was amazing. Those guys were making every play,” Paxton said.

I’m confused. I don’t understand why anyone would TRADE FOR Matt Harvey. I’d have understood signing him to a Minor League deal, assuming no risk, but trading a real-life human being for that pile of flab makes NO SENSE!! But hey, it’s the Cincinnati Reds. Who am I to second guess such a stellar organization?!

This trade is an absolute steal for the New York Mets. Highway robbery. The Mets will receive catcher, Devin Mesoraco, as well as cash in the trade. The Reds will also take on the entirety of Harvey’s $5,788,978 salary. WILD!! While Mesoraco’s career has been sidetracked due to injury, many, many injuries, at 29 years old there’s the sliiiightest chance he returns to the 25 home run, 80 r.b.i. days of 2014.

The funniest part: The Mets are playing the Reds, so Mesoraco literally walked from one dugout to the other, and joined his new team. He even pinch hit in the ninth inning, striking out in a 7-2 loss by the Mets.

Remember when idiots booed Giancarlo Stanton???? I wonder what they did Tuesday night when he hit not one, but two home runs against the Boston Red Sox….

That 1st home run….Have you ever seen a baseball leave the field of play faster?!

Heading into a three-game series with the Red Sox, the red hot Yankees stood just one game behind their enemy. But after winning their 16th-out-of-17 (3-2), the Yankees are tied (25-10) with the Red Sox. Divisions aren’t won in May, but it would be nice to watch the Red Sox get swept!!

Luis Severino continued his dominance, striking out 11 in six strong innings. And Aaron Judge’s r.b.i. single in the bottom of the seventh inning turned out to be the winning run. Hooray beer!! The Yankees will look to continue their winning ways Wednesday night when Masahiro Tanaka takes the mound against Rick Porcello. Watch the Yankees beat down the Red Sox @ 7:00 P.M. EST on ESPN.

What was your favorite part of Tuesday?? Tell me in the comment section below.