Bleacher Report published a list of the 50 Best NBA Players Of All-Time.

It’s the WORST list in the history of lists.

I’m also confident this list was made JUST to get attention.

No rational human being could have possibly constructed this list….

I wonder what costing yourself 1 Million Dollars tastes like.

I bet it tastes like poop….not that I’d know….

Bill Belichick thinks he’s special and better than everyone else.

Bill Belichick should be ashamed of himself.

After a few week hiatus, your favorite podcast host is BACK!!!!

It’s a quick preview of things to come:

Yes, Daniel Jones had an amazing 1st game. And I hope for the Giants’ sake he’s the real deal, but no one knows a damn thing after 1 GAME!!!!

Sooooooooo, pump the freakin’ brakes, and sit back, relax, and hopefully enjoy.

My favorite month is HERE!!

May is awesome for many reasons:

Yeah, yeah, those are great, but here are the REAL reasons:

Speaking of birthdays (we’ll get to sports at some point today..I promise), for those who watch, or listen, to my Sports Talk Radio Show, DaveTalksSports, today is my co-host, Uncle Mike’s, birthday!! Happy Birthday Brother!!

Which naturally transitions to MLB finishing April with a bang. How do I come up with these segues?! Genius….

A.J. Pollock is really good at baseball. Casual baseball fans don’t know that. Pollock plays in Phoenix, Arizona, one of baseball’s forgotten cities. And he’s often injured, playing in just 524 of a potential 972 games through his first six seasons (53.9%). Pollock possesses a unique power/speed skillset and is the primary reason the Arizona Diamondbacks have the best record in the National League (20-8). His THREE home runs Monday night are a prime example of his power potential.

I’m Going To Strike You Out!!

Raise your hand if you know Josh Hader….

Put your hand down, liar.

Josh Hader is a relief pitcher for the Milwaukee Brewers. He’s temporarily earning saves while Cory Knebel recovers from a hamstring injury. Monday night, Hader made history. He became the 1st pitcher, since saves became an official statistic in 1969, to strike out 8 batters, in less than 3 innings, while earning a save. 8 strikeouts in 2 and 2/3 innings. That’s some nasty stuff right there.

I guess there’s a reason why it’s never been done before…. 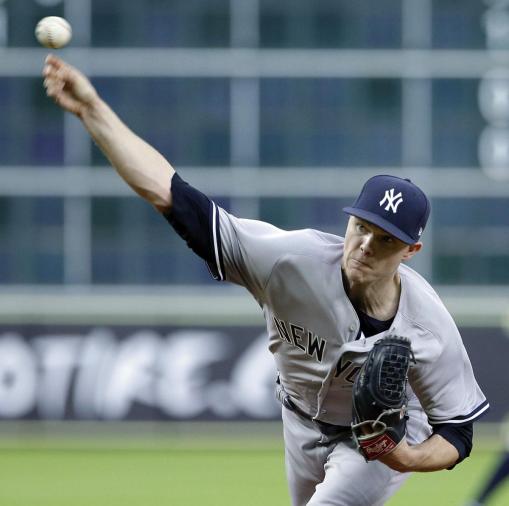 While the Yankees suffered a 2-1 loss to the Astros Monday night, Sonny Gray threw his 2nd quality start of the season:

Not the best start of his career, but encouraging against a powerful Astros’ lineup, on the road. Hopefully Gray will carry the positives from this start into May. Gray’s next start will be Cinco de Mayo, at home, against the Cleveland Indians.

The Yankees have announced they’ll stick with Austin Romine as Gray’s personal catcher.

From Bad To Worse 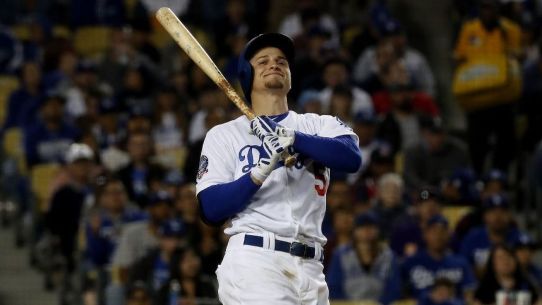 Remember when the Los Angeles Dodgers were expected to make consecutive World Series appearances?? Remember when the Dodgers had the 3rd highest payroll in MLB?? And remember when, despite having the best starting pitcher and closer in baseball, it ALL fell apart?!

That, would be today….

As if April couldn’t get any worse (12-16), the Dodgers received terrible news Monday. All-star shortstop, Corey Seager, will require season-ending Tommy John Surgery. At just 24, the 2016 NL Rookie of the Year had become a mainstay in a strong Dodgers’ lineup. His power upside coupled with a .302 career batting average made him one of the better shortstops in MLB. We wish him luck in recovery, however, his team, may be past the point of recovery.

What was the best part of the last day of April?? Tell me in the comment section below.

You can find me on the Radio as well. Download the TuneIn Radio App and search OWWR. I’m on live, every Wednesday from 6:10 P.M. – 8:00 P.M EST. Each show is also broadcast on Facebook Live via: http://www.Facebook.com/DaveTalksSports.
Since you LOVE my writing, follow me on twitter @DaveEttinger2 or like my page on Facebook at http://www.Facebook.com/DaveTalksSports. You can also Subscribe to my YouTube Channel: DaveTalksSports. Thanks for reading!! NO GO TELL ALL OF YOUR FRIENDS!!

Let us rewind to Monday evening at around 8:00 P.M.  The Knicks were getting BLOWN OUT by the Cleveland Cavaliers.  We were witnessing one of the most embarrassing performances of the year in the NBA.  The expletives that were flying around my head are words I would never dare say out loud.  The Knicks looked like they were running in quick sand.  They looked sluggish, and lazy, and they were playing uninspired basketball.  During the 1st quarter, you saw the Knicks go from up 2 points to down 10.  However, the 2nd quarter is where the flood gates opened.  The Cavaliers led by Marreese Speights, simply couldn’t miss.  Speights went a perfect 10 for 10 in the 1st half.  This is a Cavaliers team who is ranked dead last in field goal percentage.  Was it the Knicks poor defense that contributed to the Cavaliers offensive explosion, or was it simply a hot streak that couldn’t be stopped?  I’d like to think it was a combination of both, but the Cavaliers were shooting 81% from the field and found themselves with a 22 point lead less than four and a half minutes into the 2nd quarter.  Yes you read that right, the Cavaliers were beating the Knicks by 22 in the 2nd quarter.  Then, in a blink of an eye, everything changed.  With 6:48 left in the 1st half, Carmelo Anthony caught an outlet pass near half court.  As he caught the pass he tripped over his own two feet and fell down.  It looked awkward, it looked like it could have been slightly painful, but all in all it didn’t look too serious.  Carmelo Anthony picked himself up and walked (not limped) his way to the locker room.  Minutes later, we found out that he would not return to the game.  Amar’e Stoudemire took Anthony’s place in the game, and sparked an immediate comeback.  In just over one minute, the Knicks cut the lead from 22 to 15.  The Cavaliers quickly took a timeout and tried to regroup.  That did not help, as the Knicks cut the lead back to single digits.  The Knicks accomplished this by attacking the basket and cutting down on their three point attempts (other than J.R. Smith).  J.R. Smith added a much needed 18 points but went 1-7 from three-point range.  Smith is very athletic and can pretty much get to the basket at will.  He needs to concentrate more on that and spend less time jacking up countless three pointers.  With a combination of Amar’e Stoudemire’s effective post game and efficient outside shooting by the rest of the team, the Knicks staged an epic comeback.  The Knicks scratched and clawed their way back into this game and with four minutes left in the 3rd quarter, the score was knotted at 64.  The Knicks turned up the heat on defense and held the Cavaliers to just 13 points in the 3rd quarter.  These teams battled back and forth throughout the rest of the game, but in the end the Knicks proved to be too much for the Cavaliers to handle.  They pulled out a tough (much needed) victory, 102-97.

When Carmelo Anthony went down for the count in the 1st half, the Knicks found a way to pull together and storm their way back into this game.  It was truly a team effort led by Amar’e Stoudemire.  Amar’e scored 22 points on 10 of 15 shooting from the field.  Running the offense through Amar’e allowed the Knicks to play a nice inside out game.  If Amar’e wasn’t able to take the ball to the hoop aggressively, he kicked the ball out to an open man.  The Knicks found effective outside shooting from Jason Kidd and Steve Novak.  Novak made four timely three pointers, while Kidd added three of his own.  It’s nice to see Jason Kidd find his stroke, as he added 12 points off the bench.  Mike Woodson still seems to have a problem with Iman Shumpert though because he seemed to find his stroke as well in the 1st quarter.  He hit three of his first four shots but only racked up six total shots for the entire game (in 19 minutes).  I really hope that Woodson is just being cautious with Shumpert’s knee because the Knicks are going to need his production on both ends of the floor if they have any plans of making a run in the playoffs.  I find myself using the same expression over and over again, but ‘a win is a win’ no matter how it looks.  For now that might work against the Cavaliers and the Wizards, but come playoff time that is not going to cut it against the Miami Heat (if they get that far).  The Knicks have a much needed day off today, but will continue their road trip against the Detroit Pistons, Wednesday night at 7:30 P.M.

If you enjoy my writing, follow me over to intheneutralzone.com where I am a contributing author there as well.  Also you can follow me on twitter @DaveEttinger2 or like me on Facebook at http://www.Facebook.com/DaveTalksSports.  Thanks for reading, and I hope you enjoyed it!