The NFL Trade Deadline was uneventful.

The Jets NOT trading players became the storyline of the day.

Now, Jamal Adams has one-and-a-half feet out the door.

And, we are being blessed with a Game 7 in the World Series, and NOBODY CARES!!!! 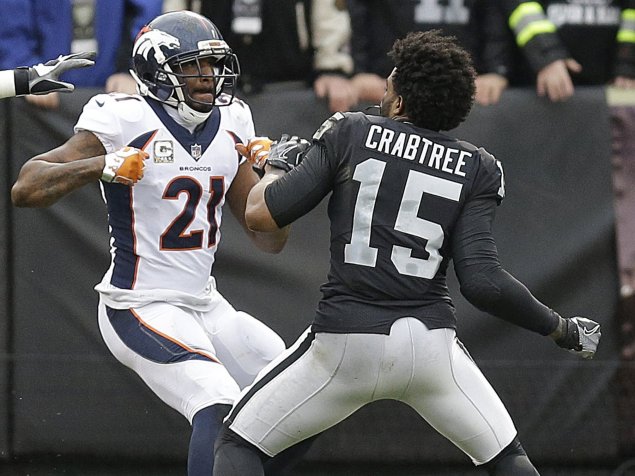 I care about me!! Me, ME, ME!! If there were thought bubbles floating above Aqib Talib and Michael Crabtree during Sunday’s brawl, that’s what they’d read. Less than 3 minutes into Week 12’s matchup between the Denver Broncos and the Oakland Raiders, things got out of hand.

Sunday’s altercation was a continuation of a feud that’s been brewing since Week 17 of last season. While tangled up along the sideline, Talib snatched Crabtree’s chain off his neck. Fast forward to this past Sunday….

Talib did it again!!

Rightfully upset, Crabtree drove Talib to the ground, taking out a camera man in the process. And a melee ensued. After a 5-minute delay, 3 players were ejected:

Talib and Crabtree were ejected for throwing punches, and Jackson was tossed for shoving an official to the ground.

Monday night, the NFL doled out lofty suspensions. While it appears Jackson won’t be suspended, Talib and Crabtree both received 2-game suspensions. From an outsiders perspective, this doesn’t sound too harsh, but as far as NFL suspension precedent is concerned, these are hefty suspensions. Both players plan to appeal their suspensions.

If the season ended today, the Baltimore Ravens would make the playoffs. That is sad. At 6-5, they hold the tiebreaker over the Buffalo Bills for the 6th and final playoff spot in the awful AFC. As if the Patriots don’t dominate enough, their road to the Super Bowl is as traffic-free as I can remember.

In the year of terrible quarterback matchups, Monday Night Football lined up a doozy; Tom Savage Vs. Joe Flacco.

That line of nastiness would be the combined stats from Savage and Flacco. Stellar!! For my math wizards out there, yes, that WOULD be 5.6 yards per pass attempt. That’s not good either.

Well, the Ravens eked out a 23-16 victory, showcasing the mediocrity the AFC breeds.

I’ve Never Seen That Before

What was supposed to be a nice little Saturday, turned into the oddest thing I’ve ever seen on a basketball court. The Alabama Crimson Tide were battling the Minnesota Golden Gophers in the championship game of the Barclay’s Center Classic. After jawing between Minnesota’s Nate Mason and Alabama’s Collin Sexton, double technical fouls were assessed. Just 27 seconds later, a fight broke out. After collectively stepping onto the court, 5 players from Alabama’s bench were ejected. Another fouled out. And just a few plays later, another left the game with an injury.

5-on-3 basketball. The Alabama Crimson Tide played nearly 14 minutes with only 3 players. The craziest part….they outscored Minnesota 55-48 in the 2nd half. Ultimately they would lose 89-84, but Alabama put forth a valiant effort behind Collin Sexton’s 40 points.

I can now cross ‘watch a 5-on-3 college basketball game’ off my bucket list.

What’s the craziest thing you’ve ever seen during a sporting event?? Tell me all about it in the comment section below.