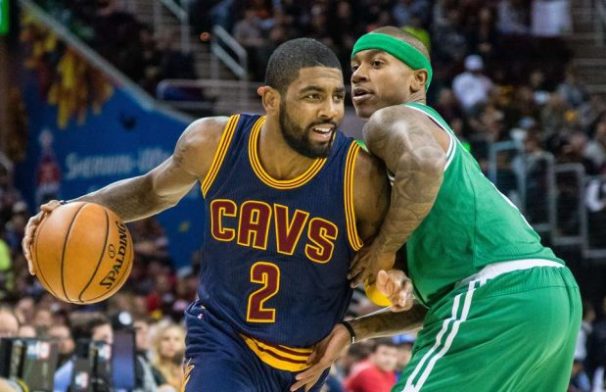 The NBA has become the gift that keeps on giving. Just when you think the NBA is going to fade into the background, BAM (yes that was an Emeril Lagasse reference) they’re right back in the news. Tuesday evening, the Twitter machine blew up, thanks to a massive trade. Two Eastern Conference juggernauts pulled off a blockbuster deal:

There are so many storylines here my head is spinning, but let’s get a hold of ourselves, and make a to-do list:

Kyrie Irving got what he wanted. He got traded off the team run by the best player in the world, so he can be the man. Forget his little, 4-team wish list (Spurs, Timberwolves, Heat, and Knicks), Irving landed in the best situation possible!!  Not only will he be the man in Boston, but he still has a cake walk to the Eastern Conference Finals. Until then, we can talk about the potentially awkward, pre-game handshake between Lebron James and Kyrie Irving….

Danny Ainge had to make a splash eventually, right?? After accumulating multiple 1st-round draft picks and young talent, the basketball world impatiently awaited the day Danny Ainge would cash-in. Well, that day was yesterday. The question is, was this the right move?? Relax, we’ll get there!! Didn’t you read my to-do list??

The entire upcoming NBA season will be spent talking about Lebron James. Will he stay in Cleveland?? Will he leave again?? Where will he go?? This is inevitable when you sign 1-year contracts. Now the question will be, will Lebron AND Isaiah stay?? They’re both free agents after this season, so it looks like the Cavaliers are taking 1 last run at the Golden State Warriors. The Cavaliers are better than they were yesterday, but they’ll still come up short in a grudge match with the Warriors. Sorry Cavs fans.

They received a 7-foot, 20-year old prospect in Ante Zizic. If you want to learn about the big fella, just click on his interesting name. They also received the Nets 1st-round pick in 2018 (which will be a very good pick). And being completely overshadowed by the little guys, is Jae Crowder. I like Jae Crowder. He’s a strong (6’6″, 235 lbs.), versatile player, who plays both ends of the floor. And the best part about Crowder is his contract; 5-years, $35 million (runs through 2020). That’s a bargain!!

I tip my cap to you Koby Altman. Altman is the newly hired, Doogie Howser General Manager (36 years old) of the Cleveland Cavaliers, and this was his 1st major move. Nice work sir!!

What do you think of this trade?? Who do you think got the better end of the deal?? Tell me all about it in the comment section below.