This is a weird time for Major League Baseball.

With approximately 100 unsigned free agents, the majority of MLB teams have multiple holes to fill. If this were December 16th, it’d be a non-issue. However, MLB is entering unchartered territory. This nonsense is about to effect my fantasy baseball research!! Just three days before every team’s first spring training workout, many big name, free agents remain on the market: 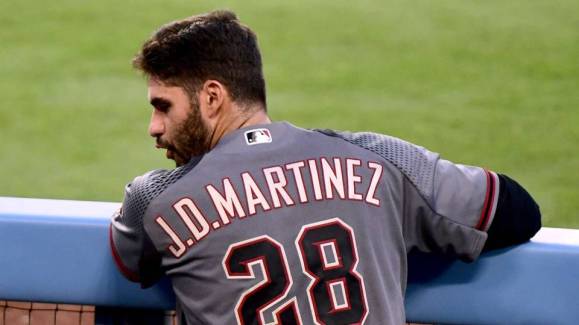 I know what you’re thinking. These aren’t household names!! What are you talking about?!

Listen, sometimes there’s an unsung hero behind a revolution. Everyone relax. I’m not comparing the American Revolution to the 2018 MLB free agency battle, but these low-level signings could be John Adams. It’s time for a history lesson I see….

John Adams was disliked in Congress. Despite having the ideas to bring the North and South together, he couldn’t be the face of the revolution. Instead, Thomas Jefferson became the face of the Declaration of Independence.

Once all these big names have signed contracts for the 2018 season, no one will remember where, and when, Andrew Cashner signed. They will, however, remember J.D. Martinez.

I applaud those who made it through the history lesson without falling asleep on your keyboard.

Andrew Cashner is a right-handed starting pitcher. Thursday, he signed a 2-year, $16 million deal with the Baltimore Orioles. For those who don’t know me, I don’t often sugarcoat things. And I’m not about to start now.

Andrew Cashner sucks. Like, a lot. The fact that he’s about to get paid $16 million to throw baseballs (rarely for strikes) is absurd. Cashner is going to get ripped to shreds in the American League East.

The fact that Jaime Garcia is set to make $10 million this season is sickening. Parents, listen up….

Have your baby do everything with their left hand. At the age of 2, put a baseball in their hand, and have them throw strikes every day until they reach the Major Leagues. Then, promptly retire.

Over the past 2 seasons, life in San Francisco and Boston afforded Eduardo Nunez full-time playing opportunities. He didn’t disappoint. Thursday, Nunez signed a 1-year deal with the Red Sox for an undisclosed amount. This deal is pending a physical, which after last year’s knee injury, isn’t a slam dunk. Stay tuned on this one.

Will Thursday’s free agent signings get the ball rolling?? Or will players remain in a stalemate with ownership?? Spill your guts in the comment section below.